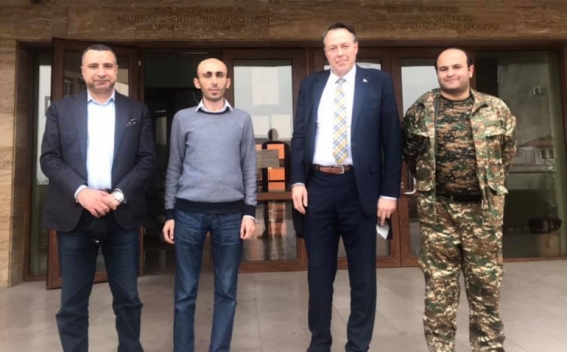 The Artsakh Human Rights Ombudsman received the Member of the Parliament of Iceland Birgir Thorarinsson and the President of the "One Free World International" (Canada) human rights organization Majed El Shafie. The Member of Armenian National Assembly Narek Mkrtchyan also participated in the meeting.
The Ombudsman presented the atrocities committed by the Azerbaijani armed forces against the people of Artsakh since September 27, which are accompanied by gross violations of international humanitarian law and war crimes.
Presenting the facts collected during the Ombudsman's fact-finding mission, Artak Beglaryan referred in detail to the cases of targeting by Azerbaijan the civilian population and objects in Artsakh, as well as persons and institutions with humanitarian functions.
The Human Rights Ombudsman emphasized that the global human rights community should record all those crimes and take active steps to make the reality available to political decision-makers, and ensure practical responses.
The Member of the Parliament of Iceland and the President of the "One Free World International" human rights organization, stressed that the war and Azerbaijani crimes must be stopped as soon as possible, making the protection of human rights a priority. They highlighted that regardless of the status and circumstances, the people of Artsakh should be under the international protection, taking into account the principle of universality of human rights.
Հայերեն На русском