The Challenges We Faced in 1988 are Ahead of us Again, Vazgen Manukyan Says 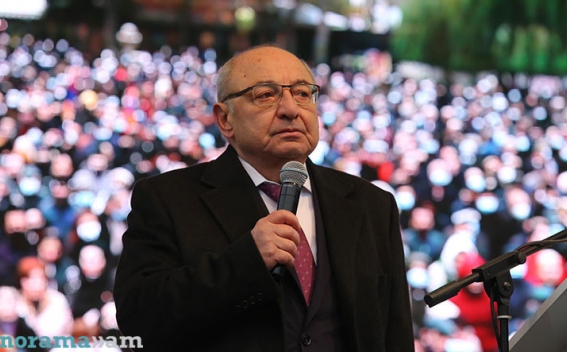 'It is noteworthy that we have gathered in the same square, where in 1988 our people came together in unity, inspiration and belief to build a free, independent and fair state," Vazgen Manukyan, the opposition's candidate for the PM stated on Saturday at Liberty Square in Yerevan. Manukyan addressed the rally organised by the Salvation Front for the Motherland, calling for Pashinyan's resignation and the formation of an interim government, Panorama reports.

Manukyan reminded that in those days the Armenian people promised to extend a hand to their sisters and brothers in Artsakh, promised to ensure their security and Artsakh's reunification with Armenia.

"Most of those promises were fulfilled. We created an independent state. Despite all challenges, we built that state. We won the war. The Artsakh and Armenian armies were considered the strongest in the region. In cooperation with Diaspora, we were increasing our influence on the international arena," Manukyan said, adding, 30 years later, the Armenian people has again gathered in the square with hurt dignity and significant human and territorial losses.

"What we have done for Artsakh is almost lost. Armenia itself is under threat. The existence of Armenia is endangered today as Azerbaijanis are determining our borders without any resistance from state bodies. This is the real situation. Should we accept this reality? The challenges we faced in 1988 are brought to us again. And we must solve them," Manukyan said.