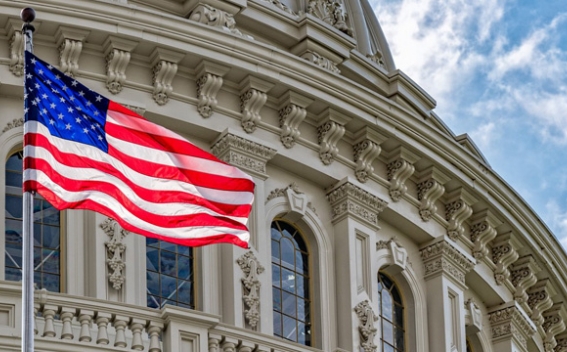 The Senate voted Tuesday to proceed with the impeachment trial of former President Donald Trump, with six Republicans joining all Democrats, NBC reports.

The 56-44 vote rejected an argument from Trump's attorneys that it is unconstitutional to try a former president, a debate that took up much of the first day of arguments from the House impeachment managers and Trump's legal team.

Voting alongside all Senate Democrats were Republicans Pat Toomey of Pennsylvania, Lisa Murkowski of Alaska, Mitt Romney of Utah, Ben Sasse of Nebraska, Susan Collins of Maine and Bill Cassidy of Louisiana.

Trump's second impeachment trial kicked off Tuesday afternoon with a jarring 20-minute video montage of the devastating events of the riot at the U.S. Capitol, forcing senators to relive some of the most intense moments of Jan. 6, some of which occurred at the very desks at which they were sitting.

Rep. Jamie Raskin, D-Md., the Democrats' lead impeachment manager, told lawmakers that their case was based on "cold, hard facts" before he played the video.

The video showed rioters smashing windows and overrunning barriers until they breached the Capitol, hurling expletives at Capitol Police officers and stalking lawmakers in the chamber.

Images of the rioters were interspersed with scenes of Trump encouraging his supporters while speaking at the Jan. 6 rally and in a video posted to Twitter.

Trump can be heard telling his supporters that "we will stop the steal" and falsely claiming that "we won this election" before telling them that "we're going to walk down to the Capitol" and that "you'll never take back our country with weakness." In the video posted to Twitter, Trump tells his supporters, who at that moment were still trashing the nation's symbol of government, that he loves them and that they are "very special."

The riots left five people dead, including a Capitol Police officer. Two more officers died by suicide in the weeks after the violence.

Twitter eventually flagged Trump's tweets for spreading false election claims and posing "a risk of violence," and it took away his account.

The sounds of the video montage echoed through the chamber, filling the air with the haunting chants and screams of the mob, including many expletives almost never heard on the Senate floor. When the video concluded, the room was silent.

Raskin, resuming his remarks, said Trump was responsible for the historic destruction within the Capitol.

"You ask what a high crime and misdemeanor is under our Constitution? That's a high crime and misdemeanor," he said. Brimming with emotion, Raskin later recalled some of the moments from the riot that moved him the most, including seeing images and reports of violence that included rioters in Trump paraphernalia who shoved and punched Capitol Police officers, gouged their eyes and beat them with flagpoles.

"This cannot be the future," he said, holding back tears.

Impeachment managers then proceeded with their arguments supporting the constitutionality of the trial.

Rep. Joe Neguse, D-Colo., another impeachment manager, outlined Democrats' legal justification for trying a former president, saying the Senate had both a legal and an ethical obligation to hear the case.

"If Congress were just to stand completely aside in the face of such an extraordinary crime against the republic, it would invite future presidents to use their power without any fear of accountability," Neguse said. "Presidents can't inflame insurrection in their final weeks and then walk away like nothing happened."

Trump's defense began with a meandering, nearly hourlong speech from attorney Bruce Castor, which failed to address the crux of the House managers' arguments, particularly those related to the constitutionality of the trial.

Castor noted that he had not directly rebutted the House manager's arguments, telling senators that the legal team does have responses they would soon hear. He suggested that Trump's legal team was caught off guard by the strength of the House managers' presentation, saying they had believed the day's proceedings would focus solely on jurisdictional questions.

"I'll be quite frank with you. We changed what we were going to do on the count that we thought the House managers' presentation was well done," he said before handing over to David Schoen, another member of the Trump legal team.

Schoen followed with a more focused presentation on the constitutionality of the trial, decrying "cancel culture," invoking the Civil War and warning that the trial "puts the institution of the presidency at risk."

After the proceedings, Republican lawmakers and Trump allies criticized the Trump team's performance. A Trump ally said Castor wasted time on "irrelevant topics" and expressed the belief that Trump is unlikely to be pleased with Castor's effort.

Toomey told reporters after the vote that he believed the House managers' arguments in favor of the trial were "persuasive and well-grounded in the Constitution and precedent," adding that Trump's defense "had a weaker case to start with, and I don't think it was very persuasive."

Sen. John Cornyn, R-Texas, said he felt Castor "just rambled on and on."

"I've seen a lot of lawyers and a lot of arguments, and that was not one of the finest I've seen," he said.

Schoen, when asked by Fox News' Sean Hannity on Tuesday night about Castor's winding opening, defended Castor and expects he will be "very well prepared in the future and do a great job in the case."

Trump is the first president to have been impeached twice by the House, and he will be the first former president to be put on trial in the Senate. Tuesday's vote affirming the constitutionality of the proceeding sets the stage for the Senate to start considering the "incitement of insurrection" article of impeachment Wednesday.

While 45 Republican senators voted last month in favor of a measure that argued that the proceedings were unconstitutional, some of them said they simply wanted a debate on the issue, so their votes may not indicate how they view the issue. Cassidy was the only senator among the 45 Republicans to vote in favor of the trial's constitutionality Tuesday.

Cassidy told reporters Tuesday: "The House managers were focused. They were organized. They relied upon both precedent, the Constitution and legal scholars. They made a compelling reason. President Trump's team were disorganized. They did everything they could but to talk about the question at hand. And when they talked about it, they kind of glided over, almost as if they were embarrassed of their arguments."

Earlier Tuesday, a senior aide on the impeachment managers' team said the case House Democrats had built against Trump in his second impeachment trial would resemble a "violent crime criminal prosecution" — a plan the eye-popping video opening appeared to corroborate.

In their presentation this week, the managers will try to show that Trump spent weeks laying the groundwork for the riot and that after he saw what was happening "he incited it further," an aide said.

Opening arguments are expected to begin at noon Wednesday, with House managers going first, followed by the attorneys for Trump.

Each side will have 16 hours to make its presentation, shorter than the 24 hours allotted for Trump's first trial last year and President Bill Clinton's impeachment trial in 1999.

The expectation is that Trump's defense team is likely not to use its full 16 hours, said two sources familiar with the legal strategy. That is subject to change, but it reflects the current thinking and the outward optimism of Trump's attorneys heading into the trial. The sources said they believe that House impeachment managers will use all of their allotted time.

"When you have such a serious charge, sweeping it under the rug will not bring unity. It will keep the sore open and the wounds open," Schumer said. "The Senate has a solemn responsibility to try to hold Donald Trump accountable for the most serious charges ever, ever levied against a president."

The trial is expected to last into the weekend and next week, and each trial day is expected to take about eight hours — meaning it would go until at least 8 p.m. ET most days but later if the Senate takes breaks.

When opening arguments are done, senators will be able to question the two sides for four hours by submitting written questions to Patrick Leahy. D-Vt., the Senate president pro tempore, who will preside over trial and who will read them aloud.

The managers could then have a debate and a vote to call witnesses or subpoena documents. If no witnesses or documents are called, the sides would move on to closing arguments, which would last four hours. Then senators would vote whether to convict.

"I have faith that 100 senators are going to do their jobs as jurors sworn to render impartial justice," Raskin said at the end of the day.