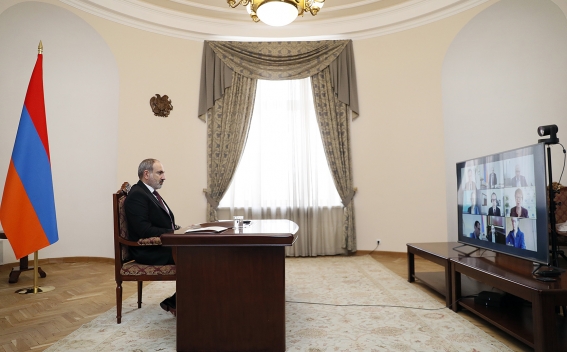 Congratulating Odile Renaud-Basso on assuming the post of EBRD President, the Prime Minister said: “Armenia highly appreciates the ongoing partnership with the EBRD as evidenced by numerous successful programs implemented in the fields of financial market, SMEs, energy, agriculture and other areas. I would like to highlight the ongoing dialogue between the Government of the Republic of Armenia and the EBRD in the context of structural reforms, as well as in terms of improving the investment climate and making the economy competitive.”

The Prime Minister noted with satisfaction that the Bank’s investment portfolio for Armenia amounted to 160 million euros in 2020, which was the largest annual package recorded during the entire period of partnership. Referring to the challenges posed by COVID-19, the war and to the socio-economic situation,

Prime Minister Pashinyan introduced the government’s anti-crisis initiatives. Noting that Armenia spares no effort to address the humanitarian problems caused by Azerbaijan’s aggression against Artsakh, the Premier stressed that the response of the international community and financial institutions to the humanitarian crisis is no less important. In this context, Nikol Pashinyan called the EBRD President’s attention to the need for closer interaction.

The EBRD President said the Bank appreciates the ongoing reliable partnership with Armenia, and is keen to expand the scope of cooperation with a view to developing energy infrastructure, the private sector, financial institutions, as well as financing new infrastructure projects. Odile Renaud-Basso described the work done with the Armenian Ministry of Finance as quite effective, which provides a solid basis for successful implementation of joint initiatives to expand the partnership with our country.

The parties went on to exchange views on the current agenda of cooperation and future programs. The private sector’s increased competitiveness was highlighted on both sides. Odile Renaud-Basso prioritized the initiatives aimed at promoting women’s economic activity in Armenia.

Nikol Pashinyan said his government promotes women’s active involvement in different fields of economic activity, including SMEs, which is an important tool for curbing poverty and ensuring economic progress.

Issues related to infrastructure projects, including the construction of the North-South Road Corridor were discussed during the meeting. With reference to the planned unblocking of regional communications, Nikol Pashinyan pointed out that the re-commissioning of transport communications could help implement new joint projects. The Premier reaffirmed Armenia’s support for the Bank’s 5-year strategy, since its key vectors go in tune with the Government’s priorities. In this context, he said that our country would be happy to host the 2024 EBRD Annual Meeting, and a decision has already been made to that effect.