Even if Biden Uses the Term "Genocide", it Wouldn't Be Right to Consider it as Final Recognition: Interview with Harut Sassounian (Exclusive) 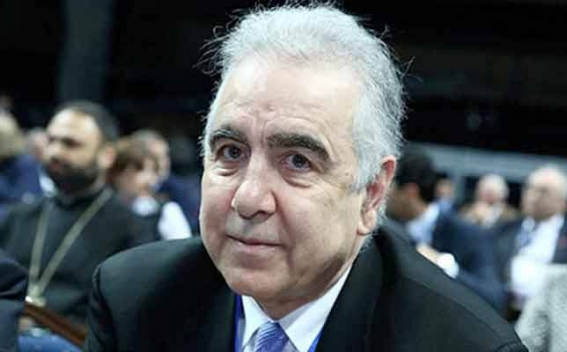 ''Armedia'' IAA talked to Harut Sassounian, the publisher and editor of "The California Courier" newspaper

- This issue is constantly creating confusion among our people, and we, in our turn, are creating confusion in the international community. The word "recognition" is commented on differently by different people.  Let's start with the simplest one. When we talk about whether the United States has recognized the Genocide or not, then in my opinion America has not already recognized it, but also has recognized it many times - even at the highest level.  But, unfortunately, our people do not have that information; they constantly talk about the fact that America does not recognize the Genocide. This is not the right approach. I should give some background.

Back in 1951, the US government sent an official document to the International Court of Justice, which stated that the Armenian Genocide was the first genocide of the 20th century. The document itself means that America has officially recognized the Genocide; since then we have had no reason to say that America did not recognize the Genocide.

Then, in 1975, the US House of Representatives passed a resolution that contained the term "Armenian Genocide."

Third, on April 22, 1981, US President Ronald Reagan signed a declaration that also contained the term “Armenian Genocide”. Fourth, in 1984 the House of Representatives "once again adopted a resolution" recognizing the Armenian Genocide.

As for Biden then it should be noted that if today Biden recognizes the Genocide, it will be an additional recognition. Certainly, we would be happy if Biden and other presidents in the future recognized the Armenian Genocide.

What refers to USA - if Biden uses the term “genocide” on April 24, this won’t mean that America has passed a law on the Armenian Genocide issue. For passing a law both Houses of Congress must adopt a new resolution. It is not about the resolutions adopted in the past; a new resolution must be adopted the text of which must also be different. The new resolution will be presented as a bill, not a resolution as such. The resolution is simply an expression of the wishes and desires of the Congress. Once a bill has been submitted and passed by both houses, it must be sent to the President. A bill becomes a US law if signed by the President. This will be the best and final step in the recognition process. This is the whole process.

-In recent days both in Armenia and in the United States rumours are being spread by media outlets and analysts that US President Joe Biden will use the term "genocide" in his speech. How would you assess the possibility of such a scenario?

-I always say that predicting the next steps of politicians is an ungrateful job, because for years every successive president of America has disappointed us. They made promises about the Genocide issue when they were running for president, but when they became president they forgot about their promises. Let’s have a little patience and see what is going to happen.

It should be noted, however, that yes, almost all the world's leading media talk about the possibility of Biden using the term “genocide”. Relations between the United States and Turkey are nowadays extremely tense, there are many contradictions, therefore, the Armenians and the international community believe that Biden can recognize the Genocide in order to put pressure on Turkey. When we consider also the fact that Biden has never sympathized with Erdogan during his years as vice president and senator, it gives another reason to think so.

-How the issues of international recognition of the Genocide and the Artsakh issue are linked in American politics and public perception, especially in the light of recent events, the war unleashed by Azerbaijan a few months ago, and Turkey's full support in this issue, including the transfer of terrorist fighters by Turkey.

- In general, we, Armenians, link these two issues. We say that Turks and Azerbaijanis tried to commit a new genocide, but foreigners do not say this, they do not use the word “genocide” while talking about the recent war.  The attack on Artsakh by Azerbaijan, Turkey, hired terrorists has a very negative impact on the image of Turkey and Azerbaijan. People show a more pro-Armenian attitude expressing their grief over the losses of Armenians in the result of the war.

-What position should Armenia take on these two issues: international recognition of the Genocide, the Artsakh issue? How should these issues be reflected in the bilateral agenda of Armenia and the United States?

-I have always been dissatisfied with the fact that the Armenian government is not taking more effective steps in these processes; this refers to both the current and the previous governments.

While the Turkish government is doing its best at the highest level - spends a lot of money hiring lobbying organizations, sends Turkish politicians to Washington (who work with senators, congressmen, as well as the State Department), threatens America - the Armenian government is doing nothing.

It's really upsetting. I hope that someday our government will begin to work more actively both in Washington and in other countries; by these efforts it will try to achieve its goals. We must take steps so that the world could help us. The foreigners cannot demand more on our issue than we do.

Our demands are as follows: yes, the Armenian Genocide took place, and we demand everything that we lost - for example, the price for the blood of 1.5 million victims, we demand compensation for all schools, churches, graves, houses that we lost, we demand compensation from government of Turkey. And finally, we have territorial claims related to Western Armenia - we demand that our historical Armenian lands be returned to us. These are our real claims. But we have left them aside and have been seeking recognition for a hundred years. We say that it was a genocide, the Turks say it wasn’t. 106 years have passed with this dispute. If this continues, another 1000 years may pass. We must do the following: we must file lawsuits in courts against Turkey. There are three types of courts. First, in all countries where there are Armenian communities, it is possible to file a lawsuit in local courts. Secondly, there is the ECHR, where any Armenian from any country in the world can file a lawsuit against Turkey. The third is the appeal of the Republic of Armenia to the International Court of Justice. It is necessary to file a lawsuit against the Turkish government at the state level and demand everything that was mentioned above.