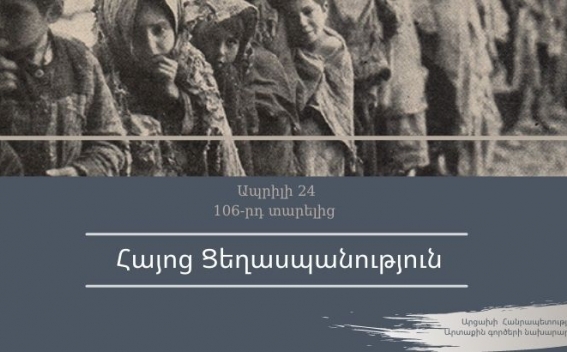 In 1915-1923, as a result of this mass crime committed by Turkey, over 1.5 million Armenians were killed and about two million were deported. The Armenian people lost most of its historical cradle and cultural heritage. The Armenian Genocide was the first state-planned and consistently committed Genocide in history.

The Armenian Genocide was followed by the Genocide, massacre, and deportation of other peoples in Turkey - Greeks, Yezidis, Kurds, Assyrians, and other ethnic groups.

The lack of a proper reaction and assessment by the international community to the crime committed against the Armenian people over a century ago paved the way for the recurrence of such crimes in the future.

The Holocaust and the Genocide of the Slavic peoples, the Roma and other nations committed by the Nazis during the World War II are a vivid evidence of that.

To date, Turkey not only refuses to recognize the Armenian Genocide, but also consistently obstructs the processes of recognizing the Genocide in other countries. Moreover, the leadership of that country continues its genocidal policy towards the Armenian people, a vivid example of which is the active participation of Turkey in the preparation for the war unleashed by Azerbaijan against Artsakh on September 27, 2020 and in the actual military operations, which were accompanied by gross violations of international humanitarian law.

The criminal policy of Turkey and Azerbaijan, their pan-Turkic and expansionist plans pose a serious threat not only to the South Caucasus region, but also to the entire civilized world.

We will be consistent in seeking the international recognition and condemnation of the Armenian Genocide and the restoration of historical justice.