The "Koltso" Operation of Deportation of Armenian Villages of Artsakh 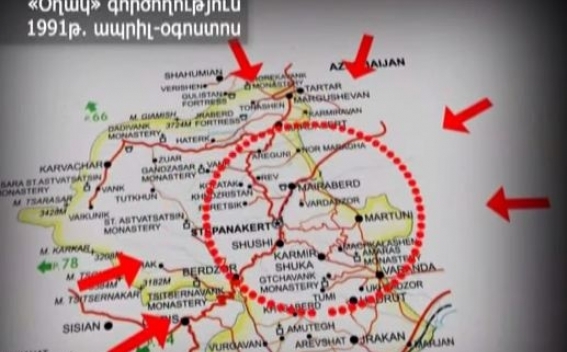 From April to August, 1991, the Special Forces of the Azerbaijani Interior Ministry (known as OMON, the abbreviation of the Russian name of the force), with the support of the troops of the Interior Ministry of the USSR and the 4th Soviet Army (its 23th division stationed in Kirovabad) launched the large-scale "Koltso" (Ring) operation on deportation of the Armenian population of Artsakh.

The decision to expel the population of a number of Armenian villages of the NKAO and surrounding regions was made by the authorities of Azerbaijan SSR in April, 1991: during the sessions of Azerbaijani Defense Council on April 10, 1991, the Presidium of the Supreme Council on April 11, 1991 and at the consultations held by the President of Azerbaijan Ayaz Mutallibov with the leaders of the KGB, the Ministry of Internal Affairs and the Prosecutor’s Office on April 16. The Interior Minister of Azerbaijan, Mahammad Asadov was entrusted with the command of the operation.

However, the ‘ousting’ of Armenian inhabitants from the villages of the NKAO and surrounding regions had started long before. Particularly, in 1989-1990 the inhabitants of three villages (Kushchi-Armavir, Azat, Kamo) of Northern Artsakh had to flee their places of residence due to the continuous armed attacks against them and pressures by the regional authorities.

From the beginning of 1991, the idea that Armenians should be expelled from Karabakh if they did not agree to submit themselves to Azerbaijan, was regularly voiced almost openly at the highest level in Azerbaijan. Even in February 1991, the Second Secretary of the Azerbaijan Communist Party, the Head of the "Organizational Committee on Nagorno Karabakh", Victor Polyanichko, while delivering a speech in Baku, announced: "1991 will be declared the year of Nagorno Karabakh. This year will be the last year of difficulties of Azerbaijan. The land of Karabakh is our soil, and we should conquer it for our children".

On March 14, 1991 the European Parliament adopted a resolution which specifically highlighted the disastrous situation of Armenian refugees and called on President Gorbachev of the USSR to take urgent and effective steps to bring an end once and for all to the intermittent blockades affecting Armenia and Karabakh and to the threats to the security of the national groups in Karabakh and the neighbouring Armenian enclaves who are seemingly being deliberately forced out.

Starting from March 25, 1991, the Azerbaijani OMON opened fire towards Getashen and Martunashen villages on a regular basis. From April 16, energy supply was terminated and telephone communication was disconnected in Shahumyn region. On April 19, troops of the Ministry of Internal Affairs of the USSR, stationed in Getashen, were withdrawn from the village. On April 21, upon the demand of Baku, regular helicopter flights from Yerevan to Shahumyan were cancelled.

On April 30, the "Koltso" operation started with a massive bombardment of Getashen and Martunashen villages, during which tanks, attack helicopters and artillery were used for the first time against peaceful civilians. One after another Armenian villages were encircled by the internal troops of the USSR Interior Ministry and the Soviet Army. This was followed by the Azerbaijani OMON and the police entering these villages under the pretext to "check the passport regime", yet in fact in order to kill, loot, intimidate and after that to deport the Armenian inhabitants.

As a result of the operation more than twenty villages of Northern Artsakh, as well as in Shahumyan, Hadrut and Shushi regions were totally destroyed and abandoned, almost ten thousand people were displaced, more than 100 were killed, and hundreds were taken hostage. The fate of many of them is still unknown.

The Armenian authorities demanded the convening of an extraordinary Congress of People’s deputies of the USSR regarding the tragic events in Northern Artsakh, but it was ignored by the Kremlin.

In May 1991 the US Senate adopted a resolution, condemning "attacks on innocent children, women and men", "indiscriminate use of force, including the bombardments of civilian areas on the eastern and southern borders of Armenia" and calling "to put an end to the blockade and other methods of using force and frightening Armenia and Nagorno Karabakh".

The Azerbaijani authorities considered the "Koltso" operation to be the start for a massive deportation of the remaining Armenians of Nagorno Karabakh. On May 22, 1991, delivering a speech at the Permanent Representation of the republic in Moscow, the Head of the Ideological department of the Central Committee of the Azerbaijan Communist Party, Afrand Dashdamirov announced that "in the near future there would be a need to expel another 32 thousand people from Karabakh". At the meeting with the delegation of the first International Congress in memory of Andrei Sakharov, Afrand Dashdamirov and the President of Azerbaijan Ayaz Mutalibov justified the deportation of Armenian inhabitants of Nagorno Karabakh and did not exclude its continuation. However, the failure of the August putsch, after which Moscow stopped supporting Azerbaijan, put an end to deportations.

The "Koltso" operation, known for its cruelty and massive violations of human rights, sharply increased tensions in the region and moved the conflict to its military phase, becoming a prelude to the large-scale aggression of Azerbaijan against the NKR.