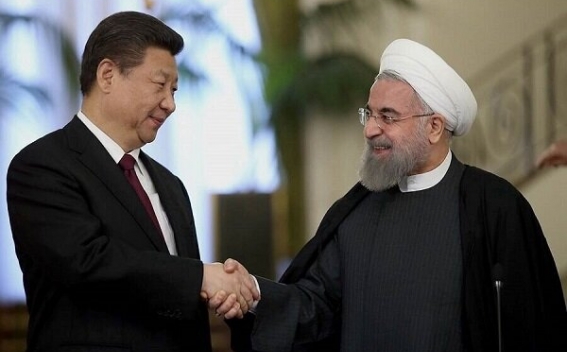 n a telephone conversation with Chinese President xi Jinping, Rouhani said Tehran-Beijing ties have been on the rise over the past 50 years and expressed hope that bilateral relations and cooperation would increase in all areas, Tehran Times reports.

Iran and China signed a long-term strategic partnership in Tehran on March 7. It was officially signed between the Iranian and Chinese foreign ministers.

Rouhani said Iran has a long-term view toward strengthening cooperation with China as a world power and insisted on the need to implement the terms of the strategic partnership.

Noting that Iran is ready to promote economic cooperation with China in West Asia, the president said such a move will lead to closer ties especially in economic and commercial areas, including export of oil and non-oil products from Iran to China and facilitation of Chinese companies’ presence in Iran.

Rouhani also pointed to Iran’s Hormuz Peace Initiative (HOPE) for cooperation between countries in the West Asia region, saying, "The Islamic Republic of Iran is ready to cooperate with China in the West Asia region on different issues including working to resolve the Palestine issue and in this endeavor the HOPE initiative can serve as the cornerstone of interaction between the two sides."

The president also thanked China for its principled positions, including its support for the 2015 nuclear deal -JCPOA – and its constructive approach toward the ongoing Vienna talks to revive the multilateral agreement.

The Iranian president also said it is necessary that unilateral sanctions against Iran be lifted and also accelerate efforts to complete the Arak nuclear reactor project within the framework of the JCPOA.

It is also necessary that Tehran and Beijing to strengthen cooperation on international issues to counter the cold war and prevent coalition building by the U.S. and its Western allies against independent states like Iran and China, Rouhani suggested.

The president also praised China for aiding Iran, including providing vaccines, to control the Coronavirus pandemic and expressed hope that Iran’s needs to vaccines to be met soon.

For his part, Xi said China and Iran can play an influential role in resolving regional and international problems by adopting similar approaches.

The Chinese leader said Beijing has been supporting the JCPOA as an international agreement and wants it to be fully implemented.

Xi added, "The U.S. cannot quit the JCPOA or reenter it whenever it wishes and that the cancellation of sanctions against Iran is a necessity for a U.S. return to the JCPOA."

Xi also said China is committed to its obligation on reconfiguring the Arak heavy water reactor.

"Iran and China can play important role in this regard," Xi suggested.