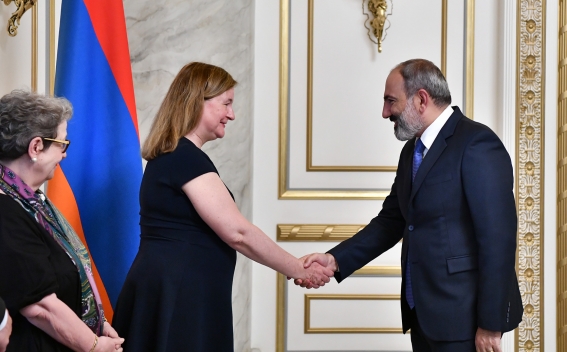 Greeting Mrs. Loiseau, Nikol Pashinyan highly appreciated her pro-Armenian activities in the European Parliament. Highlighting the resolution recently adopted by the European Parliament, as co-authored by Mrs. Loiseau, which makes special mention of the problem of Armenian prisoners of war held in Azerbaijan, the Acting Premier emphasized the need to facilitate the reinstatement of peace and stability in the region.

“I would like to highlight the appeal formulated in the resolution for Turkey to acknowledge the fact of and recognize the Armenian Genocide. I wish to emphasize that it is not only a matter of historical truth for us it, but also a key component necessary for correctly assessing and interpreting the regional situation,” Nikol Pashinyan said.

Pleased with the current status of relations between Armenia and the European Union, the Acting Prime Minister described them as dynamically developing. “In June, I met with European Council President Charles Michel in Brussels, after which Olivér Várhelyi came to Armenia and officially announced a 2.6 billion euro-worth support package for Armenia. Two days ago, European Council President Charles Michel paid a follow-up visit, during which we outlined our cooperation programs,” Nikol Pashinyan said.

The Acting Prime Minister stressed the importance of Armenia’s relations with France. “Proud of our relations, we say that the Armenian-French relations are of a privileged nature. On June 1 this year I had an important meeting with President of the French Republic Emmanuel Macron. We believe that furtherance and deepening of bilateral relations with France should stand high on our agenda. I highly appreciate the role played and the commitment assumed by the President of France in terms of his constructive approaches to security issues in our region,” Nikol Pashinian emphasized.

Thankful for the warm welcome, Nathalie Loiseau congratulated Nikol Pashinyan on his Civil Contract party’s victory in the early parliamentary elections. “You thereby demonstrated that democracy is what matters most to you. This is all the more important in the regional context. I arrived here as a representative of the European Parliament, in particular as Chairperson of the Parliamentary Subcommittee on Security and Defense, but also as a French woman, a member of President Macron’s government, who is well aware of my visit. I fought hard for the European Commission to remind Turkey of the need to recognize the Armenian Genocide, because it is impossible to build a future if we fail to face the past. Like many other French parliamentarians, I will continue to be a friend of Armenia and Armenians in the European Parliament,” Mrs. Loiseau said. She noted that in her capacity of Chairperson of the Parliamentary Subcommittee on Security and Defense, she would like to find out what the EU has still to do to stabilize the situation in the region. “I would like to see if there is hope for the exchange of new prisoners; is it possible to continue the de-mining efforts; can we continue to assist the displaced persons, which the EU delegation is already doing, and what do you think about the border provocations, the last of which just happened yesterday,” Mrs. Loiseau said.

She stressed the importance of preserving Nagorno-Karabakh’s cultural heritage and granting free access to international organizations to that end. “I would also like to know what we can do to facilitate access and ensure the preservation of heritage. You mentioned the recent visit of the European Commissioner, you hosted him and now you are hosting a parliamentary delegation. I am happy to see Armenia in the center of attention of the European Union. I would like to learn your opinion about those areas where the European Union would better have a greater presence, and in what areas you would like to see more commitment on the part of France,” the member of the European Parliament noted.

The interlocutors discussed issues related to EU-Armenia relations, to the prospects for Armenian-French interaction and to regional developments.

Nikol Pashinyan stressed that Mrs. Loiseau is considered a great friend of the Armenian people and Armenia: “You are defending the truth, democracy and human rights, which gives your activity a special weight.”