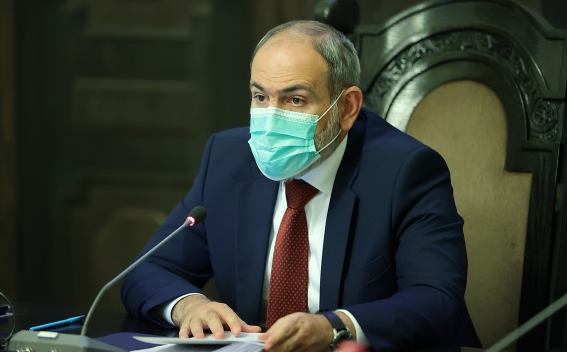 Prior to discussing the meeting agenda, the Acting Prime Minister referred to the situation at the Armenian-Azerbaijani border. Below is the transcript of Nikol Pashinyan’s opening remarks:

Despite the efforts exercised by the Government of the Republic of Armenia and the international community, the situation on the Armenian-Azerbaijani border has not yet stabilized. Azerbaijan continues to use aggressive rhetoric and carry out aggressive actions, leaving unanswered all the proposals of the international community for a long-term political settlement of the situation.

I wish to recall the statement issued by the OSCE Minsk Group Co-Chairs on April 13, in which they called for a high-level political dialogue to be resumed under the auspices of the Co-Chairs. Let me remind you that Azerbaijan has so far failed to respond to this appeal, while Armenia has repeatedly declared its readiness to resume negotiations at any time in the proposed format.

We have also voiced our readiness to engage in a dialogue on issues beyond the mandate of the OSCE Minsk Group co-chairmanship. Nevertheless Azerbaijan is trying to undermine any opportunity for dialogue by discrediting with its inflammatory rhetoric and actions the trilateral statements of November 9, 2020, and January 11, 2021. In particular, despite the 8th clause of the trilateral statement of November 9, Azerbaijan keeps holding fictitious trials on Armenian prisoners of war, hostages and other detainees and sentencing them to many years of imprisonment. Special attention should be paid to the fact that almost all convicts were captured after November 9 in the area falling under the peacekeepers’ responsibility. If we compare this with the large-scale counter-propaganda against the peacekeepers underway in Azerbaijan, as well as with the fact that Azerbaijan has not yet signed the mandate of the peacekeepers, it becomes obvious that this series of actions is targeting the peacekeepers, that is, it goes against stability and peace in Nagorno-Karabakh.

Azerbaijan also takes consecutive steps to discredit the idea of unblocking regional communications. Despite the fact that either the 9th clause of the statement issued on November 9, 2020, or the statement of January 11, 2021 makes no mention of a corridor and no specific routes are indicated therein, Azerbaijan continues to raise the issue of a corridor, pointing to specific routes and destinations.

I have repeatedly stated that Armenia has never discussed and will not discuss anything under the logic of a corridor, and with the above-mentioned formulations Azerbaijan is trying to hinder the opening of regional communications. This is not only an important concern for us, but also one of our government’s priorities.

We definitely consider that all transport and economic communications should be reopened in the region. Armenia should get transit routes through Azerbaijan to Russia, Central Asia, the Islamic Republic of Iran, and in the meantime, Azerbaijan will have transport communication with Nakhichevan, Georgia, Iran through Armenia. To implement this program, customs checkpoints will have to be set up at the relevant border points, which should be crossed on both sides in accordance with the internationally accepted procedures of border and customs control, such as those adopted within the CIS.

The Collective Security Treaty Organization is the next area in which Azerbaijan’s actions may have a well-pronounced destructive and discrediting impact. Azerbaijani troops not only continue to be illegally stationed in the sovereign territory of the Republic of Armenia, I mean the Sotk-Khoznavar section, but they also resort to provocative actions in an attempt to discredit the collective security treaty system. In parallel, Azerbaijan keeps putting the blame on Armenia for these provocations.

As a member of the Collective Security Treaty Organization, supposed to assume chairmanship in this organization this September, Armenia realizes its share of responsibility in terms of not creating security threats for the CSTO, not getting allied countries involved in military operations. I officially rule out any provocative actions on the part of Armenia’s Armed Forces.

At the same time, I believe that a possible solution to the deadlock might be the deployment of a CSTO observer mission along the Armenian-Azerbaijani border, which is provided for by the CSTO Regulations. If such a mission proves to be impossible within the CSTO framework, there may be other acceptable international formats, including the OSCE Minsk Group co-chairmanship.

I would like to underscore once again that Azerbaijan’s attempts to make it appear that Armenia is reluctant to initiate a process of border delimitation and demarcation have nothing to do with reality. On the contrary, we are in favor. Moreover, we have received a mandate from our people to start such a process in order to establish stability and peace in the region.

Back at a meeting of the Security Council held on May 27, I voiced our viewpoint concerning the demarcation and delimitation of borders, namely that both Armenian and Azerbaijani troops ought to be withdrawn from the Sotk-Khoznavar border section, Russian border guard positions should be set up to monitor the process and demarcation work should start along the border.

Given the current situation, I feel that it makes sense to consider the deployment of Russian border guards along the entire Armenian-Azerbaijani border, which would allow for demarcation and delimitation work without the risk of armed clashes. We are going to discuss this issue with our Russian colleagues.