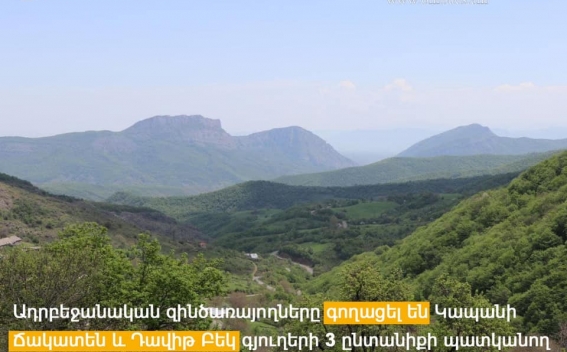 In particular, the Office of the Human Rights Defender of Armenia received alarms found out based on the alarms on 3 August 2021, that on July 26, 2021, 4 cows belonging to two families of the village were taken to pasture in the administrative territory of Chakaten village of Kapan community of Syunik province, right on the pasture about 1 km away from the village.

While grazing, the animals reached a pasture called "Yurder" in the administrative area of the village and approached the area under the control of the Azerbaijani armed forces.

According to the alarms, after that Azerbaijani servicemen tied the animals to their section without allowing them to return, and for about 5 days, the residents saw through binoculars from the mountain in front of their house that the animals were in an area called "Chambar", and as of 1 August, the animals have already disappeared.

In addition to the mentioned case, in 2 August 2021, the Office of the Human Rights Defender received one more alarm, that in 14 July 2021, a resident of Davit Bek village, Kapan community, Syunik province of Armenia, took 6 large cattle (1 bull, 5 cows) belonging to 3 villages to graze in the pasture belonging to the village, about 1.5 km away.

The villager left the pasture shortly after returning to find that five of the animals were missing and that one of the cows was returning from the side controlled by the Azerbaijani armed forces with a rope tied around his head (he took the animals to graze without a rope).

From distance, he noticed how the Azerbaijani soldiers were pushing the animals to their depths.

In both cases, the residents informed the heads of the administrative districts of the villages about what had happened.

Representatives of the Armed Forces of Armenia and the Russian border guards were also informed about the incidents. Negotiations for the return of the animals did not yield results as of August 3.

Azerbaijani servicemen refuse to return the animals reasoning that they do not have them.

The theft of animals belonging to the border residents of Armenia by the Azerbaijani servicemen and their damage are regular. Their illegal actions violate the property rights of the residents of Armenia; these actions are aimed at depriving them of the opportunity to engage in cattle breeding and earn a family income.

In addition to security, all this causes social problems, including serious damage to the border population of Armenia.

The mentioned cases confirm that in order to protect the population of Armenia, to guarantee the rights, it is necessary to create a security zone around Syunik and Gegharkunik.

This requires their removal from the neighborhood of the border villages of Armenia, between the roads of Syunik communities."