Martakert Will Have at Least 500 New Apartments in Near Future 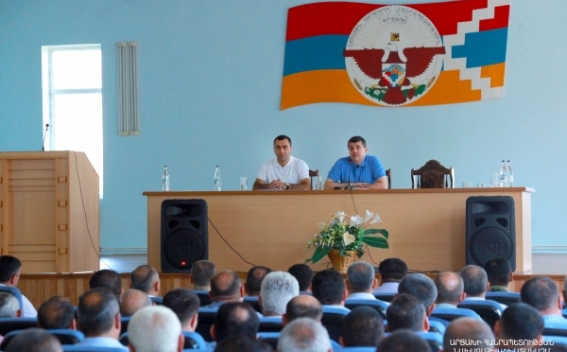 On August 3 President of the Artsakh Republic Arayik Harutyunyan paid a working visit to Martakert region. The President got acquainted with the on goingconstruction works in the region, discussed the existing problems with the heads and community leaders in Martakert and gave a number of instructions.
The President presented the development vision of Martakert city, noting that in the near future, Martakert should become the second largest settlement in the country. To achieve this, economic and infrastructure development projects are being developed. The main problem of the city is housing. The President suggested to the people of Martakert to make decisions on rebuilding the ruins left over from the war of the 1990s or building new apartments in their place. Martakert will have at least 500 new apartments in the near future.
Touching upon the security issues, the President stressed that at present stage the security is ensured through cooperation with the Artsakh Defense Army and Russian peacekeeping troops. This cooperation provides an opportunity to solve a number of issues on daily life.
President Arayik Harutyunyan held another meeting with the community leaders of the remaining villages in the occupied territories of Martakert region. Issues on resettlement of residents were discussed during the consultation.
Karen Shahramanyan, Chief of the Office of the President of the Artsakh Republic and Aram Sargsyan, minister of urban development partook at the consultation.