Aurora to Honor the Spirit of Humanity in Venice 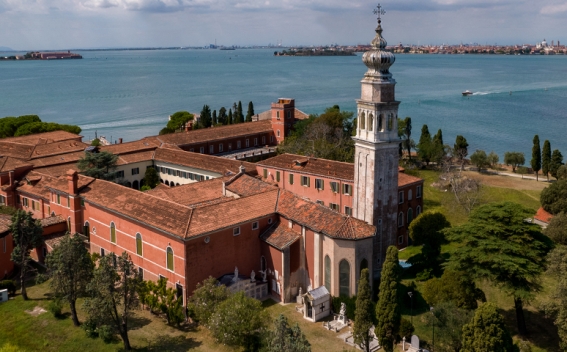 The Aurora Humanitarian Initiative has prepared a unique program for the 2021 Aurora Prize Ceremony and accompanying events that will take place in Venice, Italy, on October 8–10. In accordance with the tradition established over the years, every Ceremony features carefully curated cultural impressions honoring the spirit of our shared humanity, and the events in Venice will include some outstanding performances to celebrate modern-day heroes.

On October 9, a “Prayer for Solidarity” will be held in the Church of the Armenian Catholic congregation of Mekhitarists on the San Lazzaro Island, with religious and state leaders and representatives of the international humanitarian community in attendance. The service will be accompanied by live performances.

The 2021 Aurora Prize Ceremony, titled “Reviving Together,” will be hosted by Dalia Atallah, Aurora’s Amal Clooney Scholarship Fellow and UWC Dilijan alumna from Lebanon, and David Ignatius, Associate Editor and Columnist for The Washington Post and long-time friend of Aurora. The title of the event was chosen to reflect the Initiative’s commitment to putting into action the gratitude to those who saved Armenians more than a hundred years ago and helped them revive, as well as to highlight the eternal values of empathy, unity and cooperation that allow us to address the world’s most pressing issues, including the fight against the global pandemic of COVID-19 and its consequences, together.

The Ceremony will feature performances by Aram Ipekdjian and Jivan Gasparyan Jr. playing duduk, a traditional Armenian instrument, as well as by the Hover State Chamber Choir, conducted by Sona Hovhannisyan and famous for its experimental choral performances and promoting the Armenian choral heritage throughout the world.

On behalf of the survivors of the Armenian Genocide and in gratitude to their saviors, the 2021 Aurora Prize Laureate, whose name is to be announced during the Ceremony, will be honored with a US $1,000,000 award and a unique opportunity to continue the cycle of giving by supporting the organizations that help people in need. The event will culminate in a performance by Maestro Andrea Bocelli, a world-famous Italian opera tenor and philanthropist.

After the Ceremony, according to tradition, the name of the 2021 Aurora Prize Laureate will be added to the Chronicles of Aurora, a unique modern hand-written tome that contains the depictions of the Aurora Humanitarian Initiative’s activities. The first manuscript of its kind created using ancient Armenian techniques and materials, it was crafted in 2018 in the Matenadaran, the national repository of ancient manuscripts in Yerevan, Armenia.

In 2021, for the first time since its creation, the Chronicles of Aurora tome will leave the walls of the Matenadaran to be brought to the San Lazzaro Island, one of the world's most prominent centers of Armenian culture, where the first Armenian book was printed in 1512.

The program also includes two Aurora Dialogues events aimed at advancing insightful discussions about some of today’s most pressing humanitarian challenges. The first discussion, titled “Conversation with the 2021 Aurora Humanitarians,” will take place on October 8 and give the humanitarians an opportunity to introduce their work and the causes that motivate them. The second one, “Humanitarian Dimensions of Health Security,” is scheduled for October 10 and dedicated to the lessons learned from COVID-19 and necessary to prevent the future pandemics.

In the meantime, nominations are still open for the 2022 Aurora Prize for Awakening Humanity. Until October 31, 2021, any person can submit a nomination for the candidates they believe have overcome great personal challenges to help others.