By the End of the Year, About 300 Apartments Will Be Put Into Operation in the Capital: President of the Artsakh Republic Paid a Working Visit 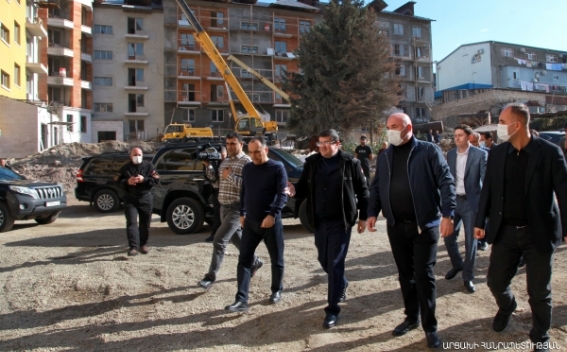 On November 2 President of the Artsakh Republic Arayik Harutyunyan in Tumanyan street of Stepanakert got acquainted with the construction works of the residential district and apartment building under construction, which are in the process of completion.
The head of state inquired from the heads of construction companies about the terms of operation, emphasizing that the issue of providing housing to many families with different social statuses is on the government's agenda. He gave a number of instructions on the spot, ordering to make every effort in order to perform the work with quality within the set timeframe. Urban development officials have assured the President that by the end of the year, the newly constructed buildings with about 300 apartments will be put into operation in several stages.
The President of the Republic was accompanied by Karen Shahramanyan, chief of the office of the President, Aram Sargsyan, minister of urban development and other officials.