Opposition Factions Boycott the Work of the Parliament 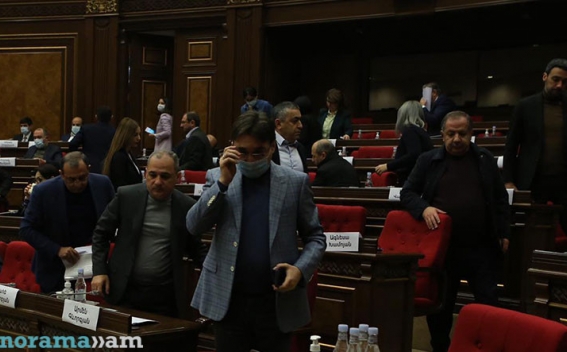 "Over the last days the opposition has tried to make use of its constitutional powers and bring the issues of vital interests of the Armenian nation to the National Assembly agenda," the Head of 'Armenia' bloc Seyran Ohanyan stated at the beginning of the National Assembly session on Tuesday, Panorama.am reports.

In Ohanyan's words, the opposition demanded explanations from the government to provide complete information about the border developments, however, the political majority unlawfully obstructed the opposition initiatives, abusing its powers.

"Moreover, amid the total lawlessness, a lawmaker from Syunik Artur Sargsyan, who had joined this demand, was arrested for the second time. Condemning this legal anarchy and in protest of this, 'Armenia' bloc will not participate in the works of the National Assembly regular session," Ohanyan stated.

The member of another opposition group Hayk Mamijanyan from 'With Honour' faction stated, in turn, that the opposition had earlier demanded to convene an extraordinary session to discuss the border developments, which has been refused by the ruling party. In his words, 'With Honour' faction will boycott the parliamentary works and will be back to the session hall once issues of vital importance to Armenia's interests are brought to the parliament agenda.