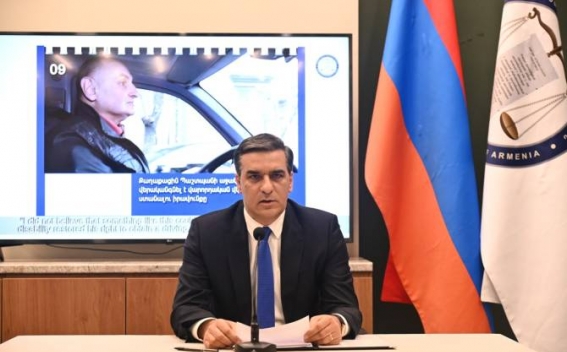 Crisis and difficult: this is how Human Rights Defender of Armenia Arman Tatoyan described his 6-year tenure.

Tatoyan gave a final news conference in his capacity as Ombudsman as his term in office is ending.

He said his term in office since day 1 was a difficult time period.

"Since day 1 we worked in difficult and crisis situations. During this period of time I was guided by important principles: remain faithful to the oath of office, do everything and do as much as necessary. The April War started after I took office. I was in Artsakh already on April 3. Then, ceasefire violations happened in Tavush and elsewhere. We’ve conducted fact-finding missions everywhere where it was needed," Tatoyan said.

The year of 2016, when Tatoyan took office, was difficult. The Yerevan hostage crisis happened, when gunmen ambushed a police station. Tatoyan said the following year was also difficult because it related to the protection of rights and detention conditions of the arrested and jailed persons in the case of the police station ambush.

"Then, the events of April-May 2018 began," Tatoyan said, referring to the Velvet Revolution. "We worked day and night. With our task forces, we frequently stayed overnight in police departments and jails to properly conduct our duties," he said.

In July 2020, Azerbaijan attacked the province of Tavush, bombarding peaceful settlements. Tatoyan was carrying out fact-finding missions and maintained contact with international organizations.

The COVID-19 pandemic period was also tense for the Ombudsman. Tatoyan said they’ve been working in several directions: raising awareness, isolations, and supervision of governmental bodies.

The disastrous war which Azerbaijan launched in September of 2020 led to numerous victims and many were left with disabilities. Villages and towns were destroyed. Tatoyan said the Azerbaijani violations did not stop and continued in the direction of border towns.