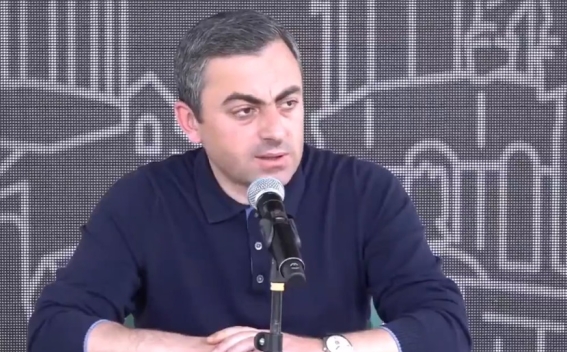 The protest campaign launched by the Armenian opposition has stopped the authorities’ attempts to “lower the bar” on the status of Artsakh (Nagorno-Karabakh), one of its leaders and a deputy parliament speaker from the opposition Hayastan bloc, Ishkhan Saghatelyan, told a news conference in Yerevan’s France Square on Saturday, Panorama.am reports.

The anti-government protests dubbed Resistance Movement began in Armenia in April after Nikol Pashinyan hinted at concessions over Artsakh, saying that the international community wanted Yerevan to "lower the bar" on its status.

“On April 25, we began the nationwide Resistance Movement, with large-scale acts of civil disobedience, including marches and rallies, launched on May 1. The Armenian people have stood up against the current government policies," Saghatelyan said.

He outlined the four key achievements of the protest campaign.

“The movement has stopped the process of lowering the bar on the issue of Artsakh's status,” he said.

“It has created a real political crisis and for our international partners the question of Nikol Pashinyan's legitimacy is obvious at least at this point.

“The movement has proved that the Armenian people will not put up with any concessions imposed on them and Nikol Pashinyan has no mandate to lead the country to new concessions.

“The movement has made it clear that there is a public demand for the ouster of the current authorities. The movement is unique in the history of independent Armenia over the past 30 years in its scale and popularity. It is, in fact, the second Karabakh movement,” Saghatelyan noted.