Armenian Anita Caracotchian: The First Female Oceanographer in the World 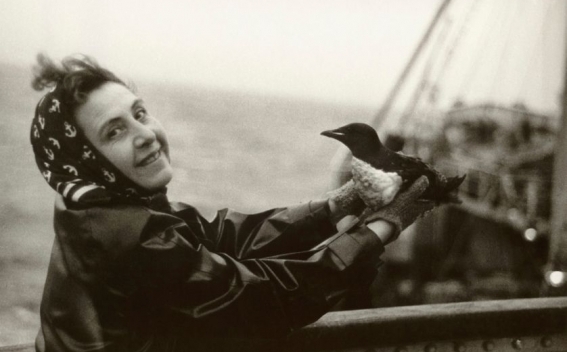 “A part of my people lived at the sea for 300 years, we had glorious Cilicia, that harbored  more than one thousand Armenian ships having tight commercial ties with the most powerful countries. After all we had the most powerful Armenian king Tigran the Great’s “from sea to sea Armenia”. I have the blood of those brave compatriots,” said Armenian explorer, photographer, the first female oceanographer Anita Conti, AAD.am reports.

Anita Conti, (Caracotchian by birth) whose researches, photos and books open up the underwater world for us, was born on May 17, 1899 in the French city of  Ermont, to the family of  obstetrician Levon Caracotchian and Alice Lebon.

Since her early years Anita travelled by sea with her family and it was then that she developed a passion for books and sea. “My parents were knowledgeable and loved to read. Travelling was their obsession. My brother Stephan and I grew up surrounded by books and travelling across countries and seas. It is not by chance that the azure waters of the seas and oceans, their tempestuous power mesmerized and charmed me back in my childhood. They say I learnt to swim before I learnt to walk,” Anita’s memoires read.

In 1914 in the wake of the war Anita’s family found shelter in the island of Oléron, where the young girl dedicates herself to ships, reading and photography.

After the war Anita’s family settled in Paris. When Anita expressed her interest in oceanography, many tried to keep her back by referring to the long standing prejudice that a women on a ships is of evil omen. Anita did not only prove to be of a good omen but also helped the mankind with her struggle to comprehend the mysteries of the ocean.

In 1927 Anita married Italian Marcel Conti, a diplomat in the embassy of Vienne. The latter helped his wife for the rest of their life to complete her mission.

Anita traveled across the world exploring the sea and marine problems. She spent a lot of time on fishing boats and read a lot about marine flora and fauna to get to know them better.

In 1935 Anita was invited to go on sailing by a ship whose crew consisted of men. The reporters covering this event, stunned by a female presence on board labelled it as “the most incredible and shocking sensation of the century.”

The first female oceanographer founded a sailing school with her own means, near Saint-Jacque harbor. According to French scientist Jacques-Yves Cousteau it would be impossible to found the famous Monaco museum of oceanography if it were not for Anita’s efforts.

During the 2nd WW Conti also dealt with demining issues in the Pas-de-Calais island and  the Barents Sea.

Conti died 25 December, 1997, at the age of 9. Her cremation ashes were spread in the Mediterranean, according to her will.