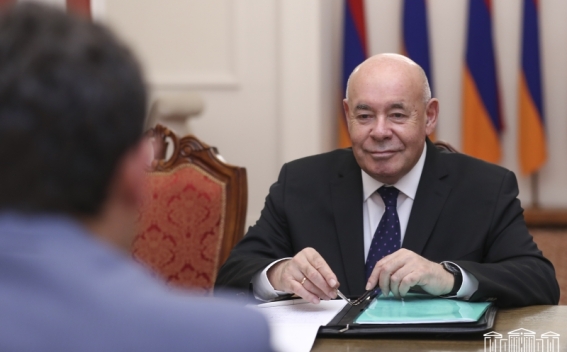 The Chair of the NA Standing Committee on Science, Education, Culture, Diaspora, Youth and Sport Sisak Gabrielyan attended the meeting.

Highlighting Mikhail Shvydkoy’s visit to our country, Hakob Arshakyan recorded that this year is a jubilee one: the 30th anniversary of the establishment of diplomatic relations, as well as the 25th anniversary of the Treaty on Friendship, Cooperation and Mutual Assistance between Armenia and Russia is marked.

''The President of the Russian Federation Vladimir Putin accepted the invitation of the Prime Minister of Armenia to visit our country in the second half of this year. I think that that visit is of special importance for the events designed in this jubilee year,'' the Deputy Speaker of Parliament underlined.

Hakob Arshakyan touched upon the Armenian-Russian parliamentary cooperation agenda, expressing conviction that the partnership relations between the legislative bodies steadily develop. In this context the NA Vice President emphasized that fact that in April of this year within the framework of the 34th meeting of the Inter-Parliamentary Committee held in Stepanavan the statue of the Russian great poet Alexander Pushkin was erected in the section called Pushkin bends of Vanadzor-Tashir highway.

Mikhail Shvydkoy also highly appreciated the level of the bilateral parliamentary relations and added that the ties in the cultural educational, humanitarian and other sphere spheres actively develop between the two countries.

A reference was made to the situation created in Nagorno Karabakh. According to the guest, they are interested in the fact that Armenians historically living there to maintain their secure and dignified life. In this issue Mikhail Shvydkoy stressed the Russian peacekeepers’ role.

Other issues regarding the deepening and expanding of the Armenian-Russian friendly relations and regional security were also discussed.