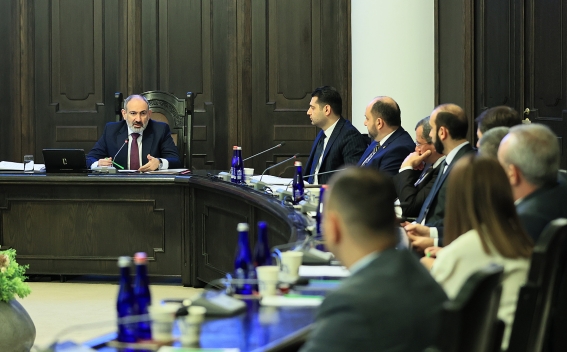 The government adopted a decision, which envisages allocating financial means for the construction works and technical supervision services of a number of road sections envisaged by the capital repair program for 2022.

According to the Minister of Territorial Administration and Infrastructure Gnel Sanosyan, in general, it’s about 53.1 km long highway, for which 4,267,513,127 AMD will be allocated. Referring to the decision, Nikol Pashinyan stressed the need to carry out the construction work at high quality and mentioned, “We should not tolerate poor quality work under any circumstances. And here a very firm approach must be shown. It’s also necessary to develop regulations for companies that continuously perform low-quality work. It is also necessary to develop an appropriate attitude towards such companies. Yes, we oblige them to eliminate the defects, but we waste time.”

In this context, the Prime Minister stressed the need to develop a ranking system for companies. "A huge amount of work is being done today, financed by the government, implemented by the private sector. And we are glad that the private sector gets profits, but the government is responsible for what is done and what is missing. We need to think of a system to rate companies, because the builder's behavior is very important here. We must be able to impose certain behavior on those companies”, the Prime Minister said, adding that it is also necessary to stricten the sanctions for companies that violate contractual obligations.

According to the Government's decision, 268,519.5 thousand AMD will be allocated to the regional administrations of Ararat, Armavir, Gegharkunik, Lori, Kotayk, Shirak and Syunik Provinces for subsidy programs. The process of procurement for 20 programs from 18 communities of the Republic of Armenia was carried out in accordance with the legislation, relevant protocols on the results of tenders were submitted. In particular, the street lighting network of Hayanist community of Ararat region was built. 267 pillars were installed on a total distance of 8 km. The administrative building of the community hall of Hayanist community has been renovated. The administrative building of Aygezard community has been renovated, the area adjacent to the administrative building and the park have been improved. Drinking water supply network of 1st, 3rd, 9th and 13th streets of Lenughi community of Armavir region, 1850 linear meters of work has been carried out. Number of beneficiaries: 150 households, 350 residents. Hunan Avetisyan street was paved in Lokashin community. The kindergarten, the post office, the municipality are located on that road section, the length of the repaired road is 400 meters, the pavement material is tuff.

According to the government's decision, 338 million 100 thousand AMD will be allocated to the Ministry of Education, Science, Culture and Sports of Armenia to provide sports benefits. The decision will contribute to the best preparation and participation of the Armenian national teams in the Paris 2024 Olympic Games, ranking tournaments, European and World Championships, as well as to achieve high results, raising the rating of the Republic of Armenia in the world arenas.

Referring to the decision, Nikol Pashinyan once again emphasized the importance of sports development in the republic in all respects. "It is important in terms of economic, political and purely sports perspective. You know that, unfortunately, the support system for sports representatives has not been institutional. In many cases they were partial, in many cases discretionary, the criteria very spatial. And we decided to make this institutional as well. That is, it should be predictable."