Arayik Harutyunyan Delivered an Annual Report in the National Assembly 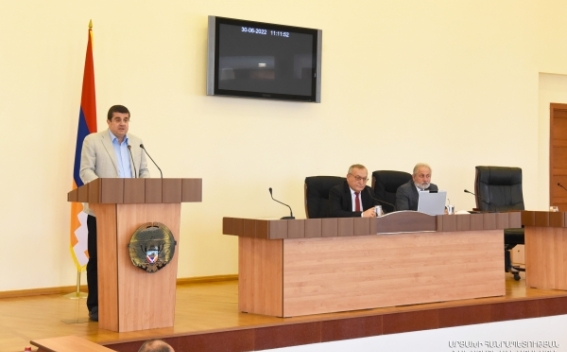 On June 30, Artsakh Republic President Arayik Harutyunyan delivered an annual report in the National Assembly sitting, presenting the course and results of the 2021 program implementation of the Artsakh Republic President, as well as the action plan for 2022.
The Head of the State summarized the work carried out in various spheres of the republic's life, outlined the security, foreign and domestic political, socio-economic priorities and plans.
In his speech the President noted that 2021 was a year of eliminating the consequences of the war and restoring normal life course for the country and the Artsakh government has continued its people-centric policy, focusing mainly on mitigating the effects of hostilities, resolving the population's vital problems, and providing socio-psychological support.
Touching upon the plans for 2022, Arayik Harutyunyan emphasized that the Artsakh Government is consistently continuing the work aimed at ensuring the security and socio-economic development of Artsakh, attaching special importance to the use of efforts and potential of everyone in Artsakh, mother Armenia and the Diaspora.
After the speech, the Head of the State answered the questions raised by the NA deputies, giving clarifications on the programs being implemented and envisaged in different spheres.
Thereafter the President of the Republic participated in the government hour within the framework of the plenary sitting of the National Assembly.