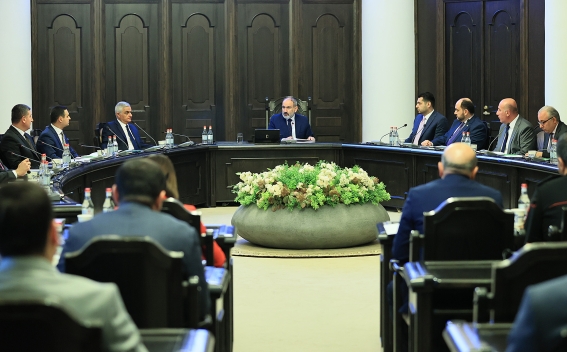 Before proceeding to the discussion of the issue on the agenda, the Prime Minister referred to the agreements reached between Armenia and Turkey. "You know that the special representatives of Armenia and Turkey reached an agreement based on the results of the last meeting to open the border between the Republic of Armenia and Turkey for citizens of third countries and to carry out cargo transportation by air between Turkey and Armenia.

Now, it is very important that our departments work with the relevant departments in Turkey, because a political agreement is important, but their implementation depends on that work. I expect that we work in a coordinated way so that we can implement the agreements reached as soon as possible," Nikol Pashinyan said.

Moving on to the discussion of agenda issues, the Government approved the draft law "On making additions to the law on military service and the status of servicemen". The adoption of the bill is conditioned by the need to establish the possibility of granting deferment from mandatory military conscription to citizens majoring in priority or important specializations for the country. In particular, the draft stipulates that the circumstance of studying in relevant universities majoring in priority and important specializations for the state will be considered target study from the point of view of deferment, and the Government will define the universities and the order and conditions of studying in relevant majors.

The Government adopted a decision to allocate 13.3 billion AMD to the Ministry of Territorial Administration and Infrastructure of the Republic of Armneia for the implementation of three major projects.

As noted by the Minister of Territorial Administration and Infrastructures Gnel Sanosyan, one of the projects relates to reservoir construction, the Kapsi reservoir. "Now the documents are under study and, if everything goes normally, it will be necessary to allocate additional 3.5 billion AMD to the construction company," he said.

The Minister informed that works are being carried out on two projects in Yerevan։ Argavand-Shirak and Babajanyan-Ashtarak, and 4.1 billion AMD will be allocated to complete them. "Medium repair works are constantly being studied. We have ten road sections with a total length of 135 km, for the repair of which we need to allocate 5.7 billion AMD," said Gnel Sanosyan.