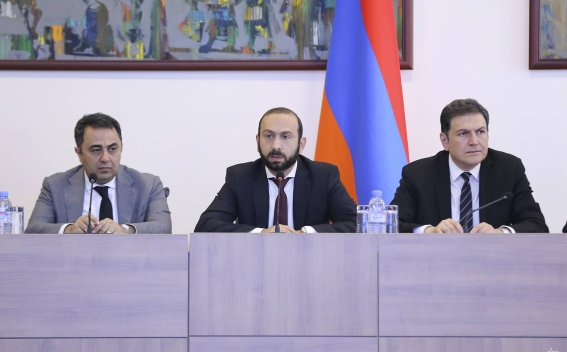 On August 4, Minister of Foreign Affairs of Armenia Ararat Mirzoyan received the heads of diplomatic missions accredited in Armenia.

Minister Mirzoyan drew the ambassadors' attention to the situation resulting from the provocative and aggressive actions of Azerbaijan in Nagorno-Karabakh in recent days. He noted that the Azerbaijani armed forces, once again violating the Trilateral Statement on the secession of hostilities in the Nagorno-Karabakh conflict zone signed by the leaders of Armenia, Russia and Azerbaijan on of November 9, 2020, carried out aggression in the area of ​​responsibility of the Russian peacekeeping forces, as a result of which nineteen servicemen of the Nagorno-Karabakh Defence Army were injured and two were killed.

The Minister of Foreign Affairs of the Republic of Armenia particularly emphasized that the Azerbaijani side has officially and blatantly assumed the responsibility for the aggression, clearly evidenced in the statements of the Ministry of Defence and the Ministry of Foreign Affairs of Azerbaijan, and the violations recorded by the Russian peacekeeping forces deployed in Nagorno-Karabakh.

Minister Mirzoyan noted that Azerbaijan’s aggression was preceded by the letter submitted to the Russian peacekeeping contingent regarding the transfer of control over the Lachin Corridor, according to which the Azerbaijani side plans to change the currently operating route through the Lachin Corridor. This is a gross violation of the Trilateral Statement of November 9 as the 6th provision of the Statement clearly reads that the plan for the construction of a new traffic route through the Lachin Corridor connecting Armenia with Nagorno-Karabakh should be decided by the agreement of the parties (i.e. Russia, Armenia and Azerbaijan) within the next three years, while there is no such plan approved in a trilateral format yet.

Ararat Mirzoyan also stressed that the Azerbaijani authorities respond to the efforts of the Armenian side to achieve stability and peace in the region with Armeophobic rhetoric, aggressive statements, and blatant threats of use of force. He considered Azerbaijan's continuous policy of subjecting the people of Nagorno-Karabakh to ethnic cleansing unacceptable.

The Foreign Minister of Armenia also referred to the unaddressed humanitarian issues resulting from the 44-day war, stressing that the Azerbaijani side continues to hold Armenian prisoners of war and civilians in violation of the provisions of international humanitarian law.

The Foreign Minister of Armenia reiterated the position of the Armenian side on the peaceful settlement of the Nagorno-Karabakh conflict under the auspices of the OSCE Minsk Group Co-Chairmanship, which is the only international format mandated by the UN Security Council.

It was also emphasized that in order to support the agenda of the Armenian side to achieve peace in the South Caucasus, coordinated and unanimous assistance of the international community is necessary.