Mishustin and Aliyev meet in Baku 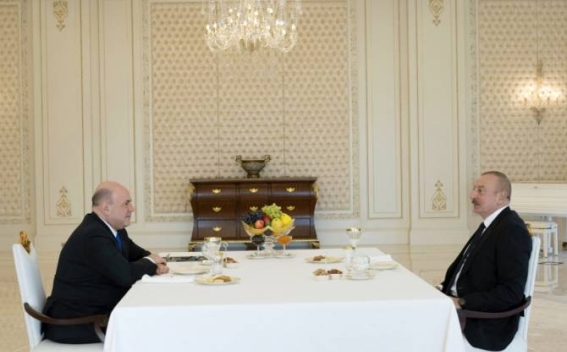 Russian Prime Minister Mikhail Mishustin and Azerbaijani President Ilham Aliyev met in Baku.
According to the press service of the Russian government, during the meeting Mishustin informed about the results of an interregional forum, which was held the day before in Baku, NEWS.am reports.

"The highest priority was given to energy, industry, transport and cultural and humanitarian spheres. And as a result of the negotiations, a number of agreements on the development of cooperation in various fields were signed.

The transport sphere is very important and special. We are convinced that joint infrastructure and logistics projects will be a new driver for increasing the whole complex of cooperation. I would like to mention in particular the western route of the North-South international transport corridor. We expect to increase the volume of traffic up to 15 million tons per year by 2030," Mishustin said.

Aliyev noted that the visit is a good dynamics in the volume of cargo transportation. "And as for the transit cargo, here, I think we're reaching record indicators - about 50-60%, and with a great prospect of growth.

In terms of transit and logistics infrastructure we will build up the potential of mutual cooperation, first of all on a bilateral basis, and with the involvement of neighboring countries, of course, because Russia and Azerbaijan have been actively investing in this sphere for many years.

And of course, strengthening the capacity of transport corridors, primarily North-South, will be in the interests of all countries involved in this project, and will open more prospects, including for business," he said.