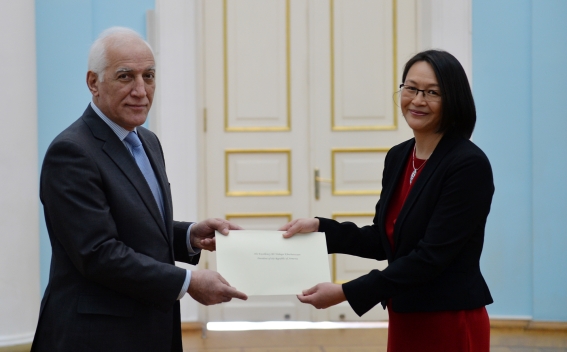 President Khachaturyan congratulated the Ambassador on her appointment and expressed hope that this appointment will contribute to the development of mutually beneficial cooperation between the two countries.

“I am full of hope that thanks to your effective activity, you will contribute greatly to strengthening the friendly relations between the two countries and developing mutually beneficial cooperation in various fields,” noted the President.

Expressing her gratitude for the reception, Ambassador Sarah Mary Walsh noted that during her diplomatic mission, she will try to foster the development of mutually beneficial economic cooperation and elevate the political dialogue to a new level as much as possible.

In her speech, the Ambassador emphasized that there is an Armenian community in New Zealand, and even though it is small, it has its role in the country's life.

During the meeting, the sides discussed the fields and opportunities of cooperation between Armenia and New Zealand. In his speech, President Khachaturyan particularly emphasized that regardless of the geographical distance, Armenia and New Zealand can cooperate in the fields of high technologies, science, information security, technologically advanced agriculture and many more.

In his speech, Ambassador Walsh touched upon the importance of fighting disinformation in the modern world and presenting the truth about regional realities.

During the meeting, the President touched upon the current level of Armenian-Turkish and Armenian-Azerbaijani contacts and reaffirmed that Armenia is committed to its position of establishing neighbourly relations with contiguous countries and achieving stable and lasting peace.