President of Artsakh meets with representatives of Armenian community in France 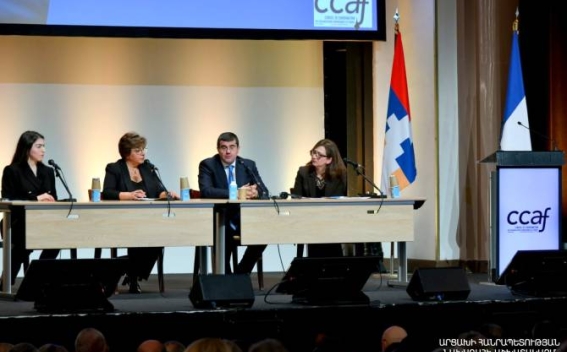 On December 7, meeting of the delegation led by President of the Artsakh Republic Arayik Harutyunyan with representatives of the Armenian community of France took place in Paris, which was organized by the Coordinating Council of Armenian Organization of France (CCAF).

Ara Toranian, French public figure of Armenian origin, and Mourad Papazian, member of the ARF-Dashnaktsutyun Bureau, who are also Coordinators of the Council, delivered welcoming speeches.

In his turn, the Head of the State presented numerous socio-economic programs underway in the republic to the participants of the meeting, aimed at resolution of strategic infrastructural problems of people forcibly displaced in the aftermath of the war, and the creation of sufficient conditions for the normal life of the population.

The President highlighted the need for pan-Armenian consolidation, increasing the degree of involvement and using the potential of every Armenian in order to face the existing challenges, successfully carry out the work underway and overcome the post-war crisis. "Every Armenian, wherever they are, should contribute to the development and strengthening of the Motherland within the limits of their knowledge, experience, capabilities, and skills. This is the only way to strengthen the Armenian statehood and preserve our national identity in the contemporary changing world. We have no alternative," Arayik Harutyunyan said.

At the same time, President Harutyunyan noted that the Armenian community of France has always stood by Artsakh and even today helps to recover from the severe wounds of the war and become a viable country, always remaining Armenian. President Harutyunyan expressed confidence that the Armenians of France will continue their patriotic activities and contribute to the deepening of practical ties between Artsakh and France.

During the meeting, Arayik Harutyunyan also answered the questions of the attendees. In response to the question related to security, the President noted that Artsakh authorities have repeatedly stated that until the final settlement of the conflict, it is necessary to ensure the indefinite mission of Russian peacekeepers in Artsakh as guarantors of the security of our people, working in parallel on ensuring additional international guarantees.

RA Ambassador Extraordinary and Plenipotentiary to France Hasmik Tolmajian, representatives of the French legislative body also partook in the meeting.