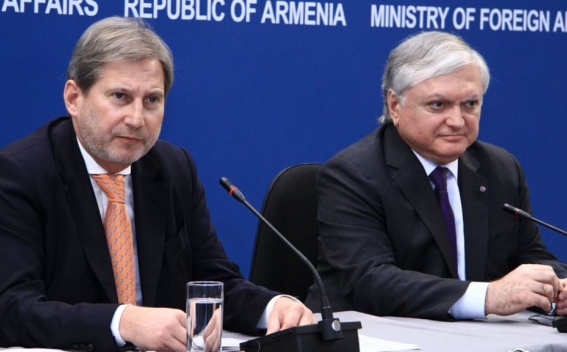 In a talk with Johannes Hahn, Nalbandian stressed the importance of the Armenia-European Union high level regular meetings, stressing that those meetings facilitate the expansion of cooperation and moving forward of the bilateral agenda. Minister Nalbandian reaffirmed Armenia's readiness to continue further deepening of cooperation with the EU in all directions, all possible areas on the basis of reached achievements, given Armenia's obligations in other international integration frameworks.

In his turn Hahn, mentioning that it is his first visit to Armenia expressed hope that his visit will bring new impetus to the cooperation.

The sides placed importance to EU-Armenia Agreements on Visa Facilitation and Readmission, entered into effort from January 2014 that pave the way to launch of the negotiations on visa liberalization. In the context of regional issues Commissioner Hahn expressed EU support to the OSCE Minsk Group Co-Chairs' efforts towards settlement of the Nagorno-Karabakh conflict.