The EU Wants To Be Engaged In South Caucasus 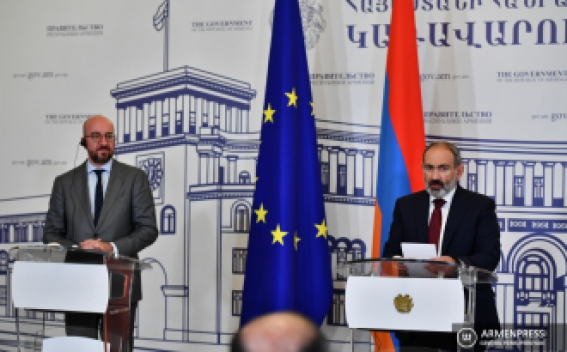 First of all, I would like to greet you, congratulate you on the [snap parliamentary] election results, as a result of which you have received a mandate that gives you legitimacy to implement the reforms. Visiting European Council President Charles Michel stated this at Saturday’s joint news conference with Acting Prime Minister Nikol Pashinyan of Armenia, NEWS.am reports.

"The EU wants to be a very committed, active, and engaged partner for Armenia's stability, prosperity, and security. In this context, we had the opportunity to talk about Armenia-EU relations: But I send you a strong message: we stand with you and reaffirm the allocation of the unprecedented 25.6-billion euro financial package to Armenia to assist in the implementation of Armenia's priorities. We had the opportunity to talk about those priorities on which your teams will work together with the EU so that these measures will not be theoretical or virtual, but are implemented as soon as possible through specific programs.

We are facing the [coronavirus] pandemic everywhere in the world. Europe is trying to export vaccines; we will continue to do so," Michel added, in particular.

The European Council chief informed that he will be in Azerbaijan on Sunday, and in Georgia—on Monday. "The EU wants to be engaged in this region. We want to strengthen ties with the countries of the region and prepare for the Eastern Partnership summit. We want to work with you in the coming months to move forward on certain issues. We are all naturally affected by the result of this [i.e., Artsakh (Nagorno-Karabakh)] war [last year] that has struck Armenia. Here I would like to pay my respects to all the victims and their families.

The EU assists, is ready to assist in the work done within the framework of the [OSCE] Minsk Group [to resolve the Karabakh conflict]. We want to inspire to continue the work of the Minsk Group. We see four issues that need to be addressed in the short, medium, and long term in order to bring stability and prosperity to this region.

The first is the moderate rhetoric, trying to avoid aggressive rhetoric. In a very specific example, in recent weeks we have had the opportunity to discuss the issue of captives with other EU partners, as well as the issue of minefield maps. We hope that it will be possible to move forward responsibly and positively on this issue.

The second point is the delimitation of borders. We hope that this also will be possible and it will be possible to start a process of negotiations, dialogue. We believe it is useful that the armed forces of both sides withdraw from the disputed territories, so that discussions can take place.

Third point: to be able to discuss possible cooperation in the domain of transport. Maybe there are other domains where regional processes can be implemented to promote economic growth and dialogue.

And the fourth point is the peace talks and the [Karabakh] status issue. I am also very careful about the issue of preservation of cultural heritage, which may be possible to resolve with the assistance of organizations such as UNESCO.

The EU stands ready to stand with you, to be a constructive and committed partner to assist you in resolving your issues, as well as in advancing the values of democracy," said the President of the European Council.