Syuzanna Vasilyan: EU's Policy in the Neighborhood Reflects the Partners' Own Aspirations 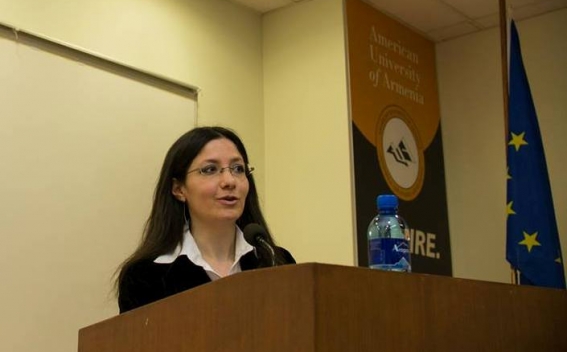 - Recently it was declared that the EU is going to change its approach to its Southern and Eastern partners and the cooperation with these partners will be more differentiated. What do you think what was the reason for such a decision and what changes to expect from this?

- Probably, it is important to start by saying that it is correct that we are currently witnessing major changes in terms of EU’s approach towards it neighborhood.  It is conditioned by a number of factors; the ones that pertain largely to the turmoil in Ukraine, also the crises in Syria, Libya, terrorist attacks in Tunisia, instability in Egypt, etc.

Starting from the Eastern Partnership Vilnius summit we saw these differentiated positions by the neighbors themselves in terms of how far they want to become integrated "with" rather than "into": in the case of the candidate countries we are talking about the integration into the block, in the case of the neighbors we are talking about approximation. So provided the preferences of the neighbors themselves starting from Armenia’s choice of the Eurasian Economic Union instead of pre-signing the DCFTA and the Association Agreement with the European Union, the crisis in Ukraine and subsequent tension with Russia, all these factors in a way generated the need for yet another review of the policy.

Now the relations with all these countries are going to be reconsidered: by the beginning of March the European Union has launched a public consultation process, it will last for four months and end by June 30th. Afterwards in fall there will be a Communication. In any case the current timing for the launch of this public consultation process is also highly important because of the Riga Summit.

Commissioner Johannes Hahn, who attended the Euronest Parliamentary Assembly session held in Yerevan in March, mentioned that there will be reemphasis of EU policy and he referred to four key points: ownership, differentiation, focus and flexibility. Although these are not completely novel, they are reflexive of the partners’ own aspirations. Speaking about the Eastern Neighborhood we observe different orientations by the neighbors.

Georgia together with Moldova are currently implementing the Association Agreement and the DCFTA, Armenia has opted for sectoral cooperation:  we have a Memorandum of Understanding on the Single Support Framework.  EU’s policy toward Armenia will focus on justice sector, public administration reform as well as private sector that is to say raising competitiveness, innovation especially focusing on small and medium-size enterprises and other issues such as engagement with civil society, etc. Yet again we expect some kind of a new framework to come out provided that the scoping exercise has been finalized successfully, as mentioned by Commissioner Hahn, and the Riga summit will be an important historical moment.

In case of Belarus the relations are going to remain frozen. As for Azerbaijan, it has opted for a more equal kind of partnership, they basically call it a strategic modernization agreement or partnership and the EU still has, in a way, to consider this. As far as my own assessment is concerned, the EU has many reservations regarding this, because the Union has such strategic agreements with basically the big players in the world.

Thus we see that currently we have divergence in the neighborhood, the preferences of the neighbors are different and as Commissioner Hahn stated EU’s policy in the region will be based on shared interests, which are not supposed to be pursued at the expense of shared values. That is to say if we are to consider EU’s policy in terms of expectations it is becoming more and more pragmatic as opposed to the previous normative aspiration.

- As you mentioned Riga summit is to be held on May 21-22. What are the expectations from this summit in general and for Armenia in particular?

- As the issues I covered in the answer to the first question mainly referred to the aftermath of the Riga summit, now I will focus on Armenia. In a recent article I wrote I referred to Armenia having generated a new foreign policy that can be called one of "supplementarity" instead of "complimentarity". The latter presupposes more or less equal weight in terms of dependence or inter-dependence, in the case of the latter the weight is heavier when it comes to inclination towards one side as opposed to other(s). The current cooperation with Russia and others such as Belarus, Kazakhstan etc. within the frames of the Eurasian Economic Union conditions this. That is to say in case of Armenia’s foreign policy we have already witnessed reconsideration. Yet, Armenia is going to foster its relations with the EU, and, as our government officials have articulated, to engage with the Union as much as possible.

For the EU this was difficult to understand not least because the Commission itself is largely a bureaucratic machine that preferred having a regulatory approach when it comes to all the countries in the neighborhood. Armenia’s deviation in a way challenged EU’s template based approach and made the Union change it. When it comes to EU-Armenia sectoral cooperation, here I think we will witness some kind of reduction or squeezing of EU’s role, as by default Armenia is becoming more interdependent with the members of Eurasian Economic Union. This is happening to the detriment of relations with others, including the EU, which has its own standards, procedures, rules that relate to trade.

According to my own assessment in the upcoming months and years, we will witness that EU policy will be development based through provision of technical and financial assistance, yet, its political role is being somehow minimized. Relying on concepts in the academic literature, the Union’s main asset has been stated by Duchene to be its "civilian power" drawing on its economic power to "civilize the others", and the "normative power" advanced by Manners (with the primary case study having been the abolition of death penalty) and the EU standing out as a pioneer in promoting democracy, rule of law, fundamental freedoms, etc. as cornerstones are going to be at least marginalized.

Thus these are the main points to be underlined when we are to refer to the expectations relating EU-Armenia relations in the future.