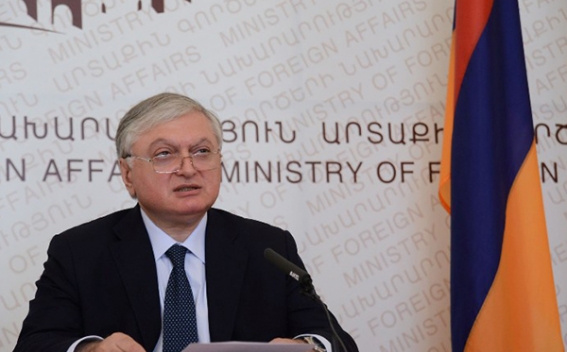 Today, on June 29, the Minister of Foreign Affairs of Armenia Edward Nalbandian delivered a speech at Eastern Partnership Ministerial Dialogue. He spoke about the EU-Armenia relations, touching upon the question of receiving a mandate for negotiations on a new comprehensive agreement. As it is written on the official website of the RA MFA, his speech reads as follows:

I want to thank my Belorussian (friend and) colleague for hosting this informal ministerial dialogue. It is a good opportunity to have discussions on our bilateral agenda with the European Union as well as to reflect on the prospects of the Eastern Partnership following the Riga Summit.

As this is the first occasion that we have gathered after Riga I want to mention that from our perspective the Summit was productive and a step forward in outlining practical cooperation directions in such fields as institutional capacity building and good governance, mobility, market opportunities and interconnections.

Armenia enjoys a comprehensive partnership with the European Union, and we have important objectives to accomplish through enhancing our political dialogue and deepening trade and economic cooperation.

We are now working with the Commission to intensify effective sectoral cooperation in a large number of areas – education, science, research and innovation, promoting people-to-people contacts and creating favourable conditions for the facilitation of trade. We look forward to concluding agreements for participation in EU programmes, such as the "Horizon 2020", and the Programme for Competitiveness of Enterprise and Small and Medium Enterprises (COSME).

In the area of transport, the Government of Armenia has expressed its readiness to conclude a Common Aviation Area Agreement with the European Union, following the liberalization of the aviation market through the Open Skies Policy.

In order to define our future contractual relations we have been engaged with our EU partners to shape the scope of a legal framework, which will reflect the contents of our past negotiations while taking into account our obligations in other integration formats. In mid March, the Armenian and EU teams concluded the consultations on the scope of future legal basis and it is our understanding that based on that the EU Member States will endorse the mandate soon so we can smoothly launch the negotiations.

In parallel to the regular meetings of the EU-Armenia institutional setup, Armenia continues its active participation in platforms and more than a dozen working groups of the multilateral dimension of the Eastern Partnership. We view this as an important and useful framework for sharing best practices and promoting enhanced cooperation, and we welcome all initiatives that strengthen inclusive cooperation and aim at building genuine partnerships between different actors through engagement of multiple stakeholders.

Visa liberalization is a mutually shared objective and it should be duly reflected in the renewed European Neighbourhood Policy. We have a solid basis for launching the next phase in our cooperation towards the promotion of mobility and people to people contacts.

The Mobility Partnership is in place since 2011 and there are several projects being implemented under its umbrella. The EU-Armenia Visa Facilitation and Readmission Agreements entered into force in January 2014 providing for the facilitated issuance of visas and orderly readmission procedures for the Armenian citizens. Since January, 2013 the Government of Armenia abolished the visa requirement for the EU citizens. This April the Armenia-EU Joint Committees on the Visa Facilitation and Readmission agreements successfully were held in Brussels.
We expect that dialogue for visa liberalization is launched as soon as possible which will undoubtedly have a positive impact on stimulating national reforms in many related areas. Therefore, we hope that the Commission and the Member States will unequivocally support the launching of the Visa Dialogue with Armenia.

Armenia well recognizes the importance of inclusive cooperation in different formats. We hold the view that it is possible to make best use of various integration frameworks employing more visionary approach. Since our joining the Eurasian Economic Union, and even before, we have been advocating for a pragmatic rationale that builds on opportunities provided by different integration formats while avoiding undue creation of new dividing lines in the larger neighbourhood. We want to make best use of our participation in the Eurasian Economic Union and at the same time generate greater synergy with the European Union.

The European Neighbourhood Policy has played a substantial role in promoting and deepening the cooperation between Armenia and the EU. We highly appreciate the EU’s continued support and assistance provided within the ENP to our country over the years, which has been instrumental for the effective implementation and sustainability of the reform process and institutional capacity building in Armenia. We are taking continuous steps towards strengthening democracy, fundamental freedoms and protection of human rights.

In this context, I would like to reflect on the remarks made by the representative of the Civil Society Forum in relation to the demonstrations in Yerevan. As I stated recently, the Armenian authorities regard the statements of genuine concern as an evidence of our partners’ interest in strengthening of democracy in our country. Inquiry is being held by competent authorities, necessary steps are being taken to address the identified drawbacks.

We once again confirm our commitment to the democracy, fundamental freedoms and protection of human rights in Armenia.

In conclusion, regarding ENP review, I would like to note that despite its holistic nature, it should outline the importance of adherence to common values (of democracy, rule of law and good governance). We are also of the view that within the new policy framework the principles of a merit-based differentiation and "more-for-more" should be reinforced and continued to be applied accordingly to reflect the pace of implementation of reforms by the partner countries, without prejudice to their different aspirations or contractual relations.