NKR - a Red Line the Armenian Elite Will Never Cross 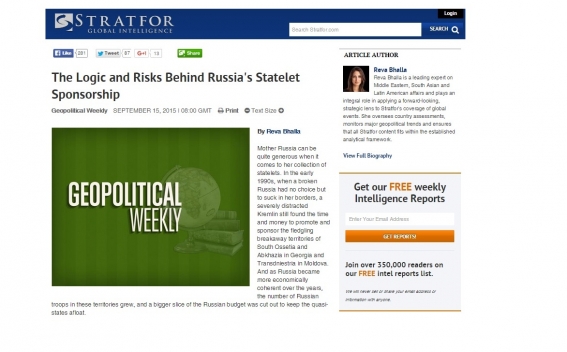 On these days, the media of our region was actively discussing the article of the analytical center Stratfor, according to which there can be a significant turnaround in Nagorno-Karabakh conflict.

"There is growing evidence that Russia and Azerbaijan can cooperate in order to undermine the status quo between Armenia and Azerbaijan, related to the fact that Russia is going to send peacekeepers to try and establish a long-term control over the region," Stratfor analysts write.

As expected, this article appeared in the tops of the Azerbaijani media and some Armenian mass media, because of the lack of professionalism, began to translate the comments of Azerbaijani analysts into Armenian, those analysts, who were inspired with the mentioned article.

Reading the article of "shadow CIA" - as they like to call Stratfor in Azerbaijan - it becomes obvious that the analysts of the American private research company do not have a full perception of the realities in the South Caucasus. In particular, very little attention is paid to NKR, on the other hand Russia's influence on Armenia is exaggerated. These analysts, with high salaries, forget that one of the key reasons that Nagorno-Karabakh conflict has not been solved yet, is that no president of Armenia succumbed to external pressure, and went to disproportionate concessions, thereby not going against the will of the citizens of Armenia, for whom Artsakh is a part of the national identity. As for the citizens of the NKR, the republic's independence for them is more than a part of their national identity; it is the guarantee of their physical safety. Excluding these two important factors, analysts of Stratfor made miscalculation, as the NKR is the red line, which the Armenian elite in any case will not cross, regardless of pressure or threats from partners.

Analysts, strangely enough, also forgot about the other co-chairing countries of the OSCE. It is obvious that both the US and the EU (represented by France) have their own interests in the Karabakh issue, and it would be naïve to think that they will cross their hands, allowing Russia to make serious changes in the region.

As for the deployment of peacekeepers, the Armenian sides have repeatedly claimed that no peacekeeping forces can guarantee the security of NKR citizens better than  the NKR Defense Army does. On this occasion, the press secretary of the NKR President David Babayan explained the official position of NKR. According to him, the issue of peacekeepers can be solved if Azerbaijan recognizes the independence of Artsakh with its current borders, and that is very symbolic. Because in this case, the deployment of peacekeepers will be meaningless, since the armed forces of the two countries manage to defend the borders of their countries and respect the ceasefire.

It is noteworthy that this article is not the only one, where Stratfor analysts are trying to convince readers that the South Caucasus after Ukraine will be the next arena of confrontation of the West and Russia. Taking into consideration all the above mentioned, a question rises: What is the purpose of this analytical structure, the objectivity of the analytical articles of which can be put under question?