Armenia-Japan: New Impetus for the Development of Relations 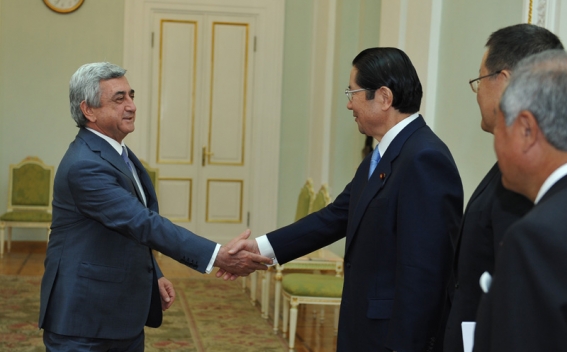 Welcoming the first visit of the delegation to Armenia, the President of Armenia underscored that Japan holds a special role in Armenia’s relations with the countries of East Asia, and our country is striving to develop multifaceted and mutually beneficial cooperation with the friendly Japan. Serzh Sargsyan expressed hope that the visit of the delegation headed by Seishiro Eto will become a new impetus for the development of the interparliamentary relations between Armenia and Japan and will elevate the Armenian-Japanese cooperation in that area to a qualitatively new level.

At the meeting, the parties noted with satisfaction that the official visit of President Sargsyan conducted to Japan in 2012 which according to them opened new opportunities in the expansion and deepening of bilateral cooperation.

President of the Japan-Armenia Parliamentary Friendship League Seishiro Eto stressed the importance of parliamentary diplomacy in the interstate relations, expressed readiness to do his best to invigorate the ties between the members of the two Parliaments and promote the strengthening of the Armenian-Japanese interparliamentary relations and to translate them into a solid base for the development of the economic relations between the two countries.

The parties discussed opportunities and potential of developing mutually beneficial partnership in different areas and in the framework of international organizations.