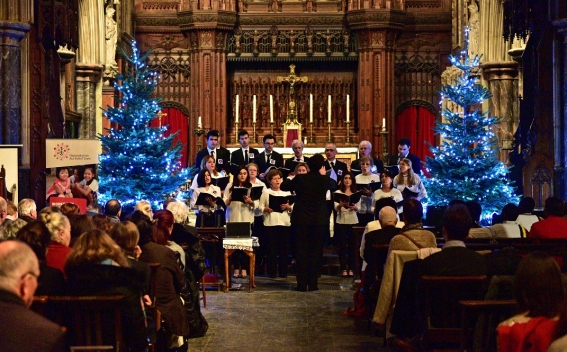 A few days ago the annual ''Christmas Carol Concert'' was organized by Baroness Caroline Cox with the supervision of Humanitarian Aid Relief Trust at St. Cuthbert’s Church.

As Panorama.am reports, referring to the Tekeyan Center Foundation reports, Komitas Choir of Tekeyan Trust & Cultural Association of the UK has again taken part in the concert upon the invitation of Baroness Cox.

In order to pay tribute to the memory of the Armenian Genocide victims the members of the choir were wearing signs with forget-me-nots and before the performance of the choir Conductor Sipan Olah turned to the symbolism of the forget-me-not in his welcome speech recalling the tragic historical incidents. He also noted the day was another day of commemoration for the Armenian people as a devastating earthquake hit Armenia on 7 December 1988 claiming thousands of lives.

Baroness Caroline Cox has congratulated the participants of the concert. She particularly underscored the obvious development in the performance of the Komitas Choir and congratulated President of the Choir, Honorary Secretary of London Tekeyan Trust Vartan Ouzounian, Conductor and Artistic Director Sipan Olah, as well as the members of the choir welcoming the important cultural activities carried out by them both within the Armenian community and in the British society.