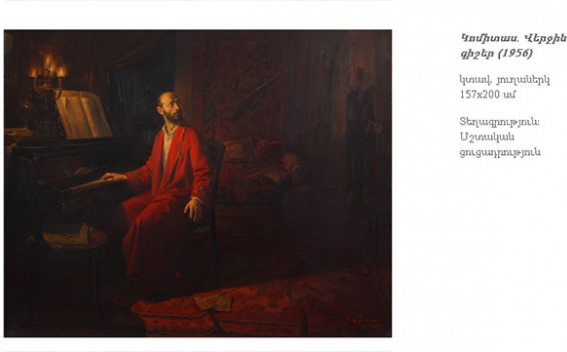 - Mrs. Muradyan, what was Sargis Muradyan’s path to the painting “Komitas, the Last Night” like?

- Sargis Muradyan was born to a family of Armenian migrants, in 1927. The family had found refuge in Yerevan. Having such a background patriotism and the Armenian genocide became one of the key lines of his work. His works carry the imprints of the 20th century landmark events of the Armenian history – Genocide, national liberation movements, civil war, WW2, revival of the Armenian think tank in the 60-70s and further cultural and political transformations in the country, up to the massacres in Sumgayit. My father had an active role in 1965 recognition of the Armenian Genocide and 1988 struggle of Artsakh issue settlement.

My father wanted to make his graduation thesis in 1951 the Avarayr battle. As Stalin was alive, such topics were considered as nationalistic and were condemned. The rector of the institute, Ara Sargsyan recommended him to refrain from such a dangerous topic. But the sketch he had made then, is still there and has recently been exhibited in his 90th birthday exhibition. The topic was banned but after Stalin’s death he was among the first to touch upon the Mets Yeghern (“Komitas, the Last Night”, “Komitas, 1915, April”) and the Armenian history. “Komitas, Last Night” is a part of permanent exhibition of the national gallery of Armenia. Komitas had been painted before, but never in the context of the Genocide.

- How did the picture came to be famous?

- In 1957, after being exhibited in the regular Republican exhibition in Armenia, there were lasting discussions whether the painting should be exhibited in Moscow where  Days of Armenian Culture were held. It is said that some of our ministry employees were scared to show up in Moscow with that topic. In the end, thanks to the deputy minister of culture of that time, they took it to the Moscow exhibition where it won a Gold Medal. It turns out that it had been accepted both by the society and the country's leadership.

By the way, there is an interesting story that goes with the picture. Paruyr Sevak was a PhD student in Moscow at that time and as he entered the hall during the exhibition, he went up to the canvas “Komitas, the Last Night” and said, "Who is the author of this picture?" And it was then that he got to know my father. Later, when I read my parents' correspondence after their death, I realized that they had slightly known each other back in Yerevan. Later they discovered each other as arts people. On the exhibition day my father and Paruyr went to Paruyr’s student dormitory, where one of them wrote Komitas and the other painted Komitas all through the night. And that marked the start of their inseparable company. The expression of their company is my father's fresco at Sevak’s House Museum, as well as numerous portraits of Sevak. My father presented Sevak as a collective image of our times.