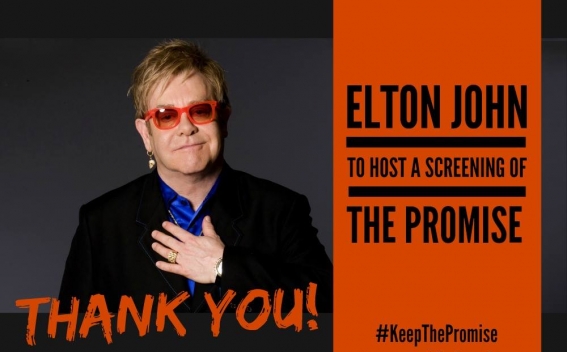 Elton John and David Furnish will introduce Open Road and Survival Pictures new film – “The Promise”– which tells the story of the Armenian Genocide in Turkey at the outset of World War I. Written The Film will be introduced at the Elton John AIDS Foundation (EJAF)'s 25th annual Academy Awards Viewing Party which is to be held on Sunday, February 26, PanArmenian reports.

"We have only to look at the horrific HIV/AIDS outbreak that followed in the wake of the Rwandan genocide in the mid-1990s to understand the direct connection between human rights atrocities and public health crises like the AIDS epidemic," said EJAF Founder Elton John. "Through our friendships with the Manoukian family and producer Dr. Eric Esrailian from UCLA, David and I became more personally aware of the Armenian Genocide and its timely relevance to social issues today. The film's theme #KeepThePromise can be interpreted as keeping the promise to remember and learn from the atrocities of the past, as well as keeping the promise to end AIDS. At EJAF, we are committed to #KeepThePromise and raise awareness about this powerful film that uses classic storytelling to inspire people to take action today. We are honored to share the important timing of our Oscar-night event to introduce people to The Promise."