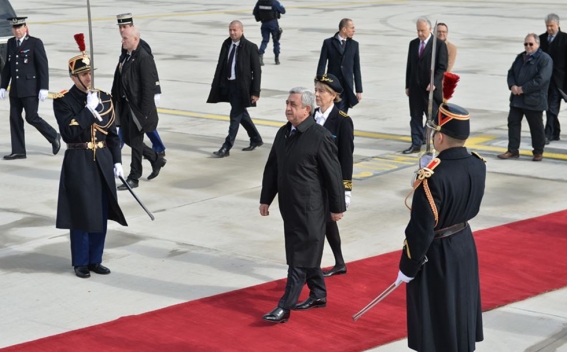 On March 8-9, Armenian President Serzh Sargsyan was on a working visit to France. During the visit, the President had high-level meetings with French President Francois Holland, General Secretary of the International Francophonie Organization Mikael Jean, representatives of the Armenian communities of Europe, members of the authoritative association of entrepreneurs of France, the organization "Movement of Enterprises of France" (MEDEF), Chairman of the National Assembly of France Claude Bartoloni, as well as the mayor of Paris, Anne Hidalgo.

It is significant that in a number of meetings held within the framework of the visit to France, key accents were made on the possible development of the Armenian-French economic cooperation.

In this sense we will single out two meetings in particular, one with the Union of Entrepreneurs of France (MEDEF) and the other with the representatives of Armenian communities in Europe.

The Union of Authoritative Entrepreneurs of France or "The Movement of Enterprises of France" (Mouvement des Entreprises de France-MEDEF), is an employers' organization, which was founded in 1998. The organization is the representative of French enterprises. This union of employers plays a significant role and is important in the formation of the public dispute in France, despite the relative representation.

Founded on October 27, 1998, MEDEF creates the National Council of French Employers (CNPF). The aim of the organization is to introduce French entrepreneurs to trade unions and government bodies. The organization has been joined by 750,000 enterprises.

Meeting with the representatives of the "Movement of Enterprises of France," President Serzh Sargsyan presented the attractiveness of the investment environment in Armenia, urging to make investments in our country. It should be noted that in his speech Serzh Sargsyan drew attention of the representatives not only to the simplified procedure for foreign direct investment (FDI), including in the tax and customs sphere, but also to the multiple opportunities that the Armenian economy may give to the French companies in economic relations with the countries of the EAEU and Iran.

As for meetings with the representatives of Armenian communities in Europe, the president also drew the attention of local Armenian entrepreneurs to the opportunities created by the multi-vector policy of Armenia.

At the meeting with French President Francois Holland, the fact that the Armenian-French relations are at the highest level, while the economic, cultural, touristic relations contain a great potential for development was emphasized.

In this context, the importance of the fact that within the framework of economic relations it is not sufficient to consider only the mutual trade, but it is also necessary to develop the potential in favorable information, scientific and other directions was stressed.

If we summarize what has been said, it can be stated that the visit of Serzh Sargsyan to France, rich in multilateral meetings, confirmed the depth of the Armenian-French political friendship and proclaimed the readiness of both sides to move to a qualitatively new level of cooperation between the two countries.