Nalbandian: EU Has Been and Will Remain Our Trusted Partner 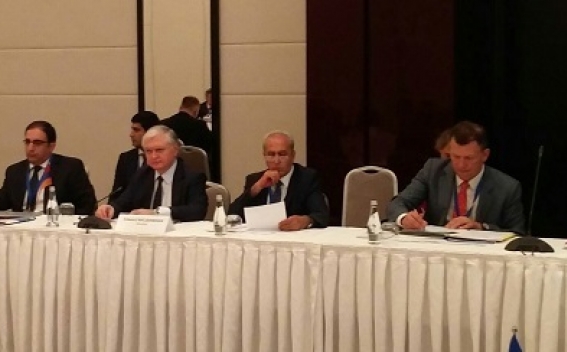 The Foreign Minister of the Republic of Armenian delivered a statement by Minister Nalbandian at the Informal Ministerial Meeting of Eastern Partnership in Chisinau.

Bellow is the full text of the statement.

Thank you, Andrei, for hosting us in Chisinau and for offering yet another opportunity for the exchange of views before the upcoming Brussels Summit.

On many occasions we have underlined the importance of the Riga Joint Declaration, its four main areas of cooperation, principle of differentiation and other provisions that have guided our efforts within the Eastern partnership during the past two years. Armenia has registered sound achievements: Horizon 2020, COSME, launching negotiations on the Common Aviation Area Agreement, as well as the "Creative Europe", that we intend to finalize soon, but first of all, the new Comprehensive and Enhanced Partnership Agreement that we initialed and plan to sign in Brussels this November.

Armenia and the EU have finalized the Partnership Priorities for 2017-2020 and tomorrow in Yerevan we are going to start the talks on the Single Support Framework of the EU assistance to Armenia for the same period.

Among the pending issues I would mention the launch of the Visa Liberalization Dialogue. Facilitating and intensifying the mobility and people to people contacts has been put in the core of the Eastern Partnership and should continue to remain as such.

In terms of the future of our cooperation, I would like to refer to the ideas expressed by Johannes at the Ministerial meeting in Luxembourg, specifically, the ones related to the expansion of the TEN-T network, harmonization and reduction of the roaming tariffs and funding the development of the Small and Medium Enterprises of partner countries in local currencies. I believe that these proposals can be integrated in the agenda of our future cooperation, which I hope will be equipped with many other productive programs.

I would also like to recall the "20 deliverables for 2020" document. It is indeed a programmatic plan of action, that outlines the prospects of cooperation within the Eastern Partnership.

It goes without saying that drafting of the Final Declaration is one of the most challenging tasks ahead of us in preparations of the Summit. Armenia stands ready to contribute to the meaningful document that will reflect the true spirit of cooperation and direct our efforts for the years to come. The agreed language of the Riga Declaration may serve as a basis for overcoming contentious issues as they arise. I share the opinion of those colleagues who believe that there is no need to poison the atmosphere of the upcoming Summit with the issues that we all know can block the consensus.

The successful cooperation with the European Union has contributed to the Constitutional reform process and parliamentary elections held in Armenia this April, that were praised by our partner countries and specialized international organizations.

Armenia is committed to continue the reforms. The European Union has been and will remain our trusted partner in these processes.

Armenia appreciates the partnership with the European Union and looks forward to the future fruitful cooperation.