Ambassador of Poland to Armenia Presented His Credentials to RA President 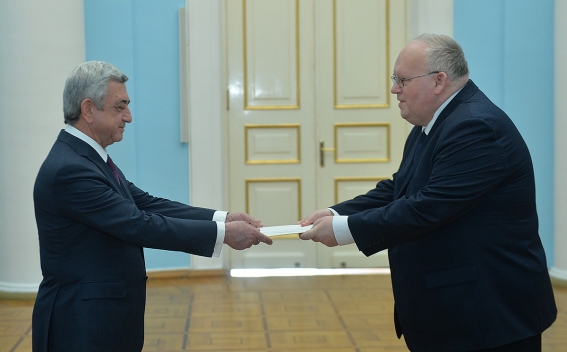 Congratulating the Ambassador on assuming the office, the President of Armenia wished him every success and expressed the hope that strong with a remarkable wealth of long experience and diplomatic activities, he would help upgrade the Armenian-Polish relations and expand the bilateral cooperation agenda. Serzh Sargsyan noted with satisfaction that the relations between Armenia and Poland have always been constructive and warm.

Emphasizing that last year the two countries marked the 25th anniversary of diplomatic relations, as well as the 650th anniversary of establishment of the Armenian community in Poland, President Sargsyan thanked the Polish people for the friendly and warm attitude shown to a portion of our people.

Thankful for the reception, the Ambassador said that during his tenure, he will face the priority task of exerting consistent efforts to deepen the Armenian-Polish economic ties, which have great development potential, and boost the commodity turnover between the two countries.

In addition to the opportunities for developing bilateral relations in political, economic and humanitarian spheres, President Sargsyan and Ambassador Ceplak discussed issues related to the furtherance of cooperation in multilateral formats - within international organizations.

Reference was made to the development of the Armenian-Polish cooperation on the margins of EU-Armenia Comprehensive and Enhanced Partnership Agreement in the wake of its signing. The parties stressed the need for intensifying the inter-parliamentary dialogue as a powerful means for strengthening interstate relations.

In conclusion, the President of Armenia and the Polish Ambassador exchanged views on the peaceful settlement of the Nagorno-Karabakh conflict.