Parliament Will Have Much to Do in Terms of Implementing Armenia-EU Agreement: Karen Bekaryan 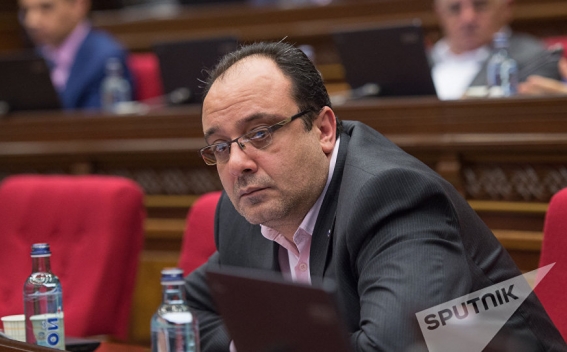 Tomorrow, ratifying the Armenia-EU agreement, we will actually enter a new stage, when the second component of the declared "both... and" policy will also enter into force. This was declared by a Member of Parliament Karen Bekaryan during the discussions on the ratification of the Comprehensive and Extended Partnership Agreement between Armenia and the European Union in the National Assembly of the Republic of Armenia.

"The importance of the agreement has been repeatedly discussed, and one thing is a fact: this was not given easily, this required a great deal of work and today we should express our satisfaction that this stage has become possible," Karen Bekaryan noted. He stressed that "one thing is to have an agreement, another thing - to implement it, and all of us, including the parliament, will have a lot to do in tat direction." Moreover, according to the MP, it is necessary to do it not only under parliamentary instruments, but also with direct initiatives.

"The political part is very important, the example of which can be the attitude towards the settlement of the Karabakh conflict and the fixed elements that support the format of the OSCE Minsk Group Co-Chairs and the three principles for conflict resolution. This is not the option of our dream, but this is the option that is under the negotiation format today. And only the fact that all the wishes and intentions of Azerbaijan are blocked at least throughout the EU, is essential for both us and for the conflict settlement process," MP noted adding that we should not weaken our vigilance, considering the fact that there is a negotiated document with Azerbaijan also. Karen Bekaryan hoped that the EU would not act as other institutions or countries, which have a document one and a contradicting document with the other. "So, we should not weaken our vigilance. The last example for this is the latest document of the Non-Aligned Movement countries, where there is quite large number of the same Francophone countries, which put the signature under different formulations in different documents. Now we have to be vigilant for not having such a situation with the EU," Bekaryan said.

He also highlighted the element of regional politics, where, not directly addressing to the Armenian-Turkish border, all the prerequisites are set which can further be included in the working agenda to promote this issue.

As another important component of the Agreement, Karen Bekaryan highlighted the existence of all spheres, including commercial and economic.

Touching upon the question of methodology, the MP noted that the Partnership Council, as set out in the agreement, will serve the purpose, when a question or need of a legal or regulatory act rises, as a result of the discussion of the Partnership Council, it will enter the implementation field. According to Karen Bekaryan, the next important element of methodology is the details which often even surprise us. "On the one hand, we ask if our citizens will directly experience anything or not, on the other hand, we are amazed from the details. In fact, this will help the citizens feel the results of the Agreements, and this methodology is therefore more than welcome," MP emphasized.

"When we talk about the political will, it is necessary to take into consideration that it is the result of political will of our authorities that today we are discussing the ratification of the Comprehensive and Extended Partnership Agreement between Armenia and the European Union, and tomorrow we will start the ratification process," Karen Bekaryan mentioned at the end of his speech expressing hope that we all, including the citizens, will feel the results of the ratification.