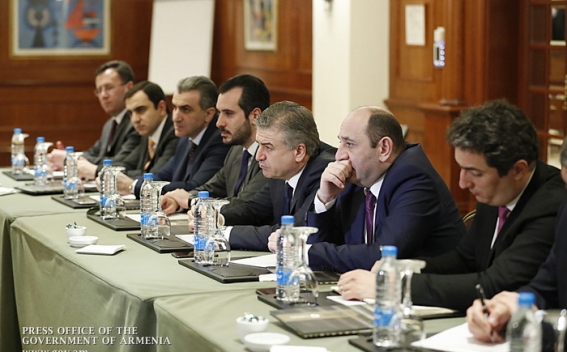 In the frame of his official visit to Lebanon, today Prime Minister Karen Karapetyan met with Lebanese businessmen in Beirut.

The prospects of investing in Armenia were discussed at the meeting. Headed by Company Co-founder Romen Mathieu, the members of the EuroMena Funds’ delegation presented the areas of their company’s activities and the wealth of know-how they had built up. They noted that the Company is keen to cooperate with Armenia in the fields of insurance, information technology, services and construction.

Prime Minister Karapetyan presented Armenia’s current economic position, stressing that a 7.5% economic growth was recorded in 2017. The other macroeconomic indicators, too, were positive last year. Karen Karapetyan noted that it is now the right time to invest in Armenia which benefits from different preferential trade regimes.

Welcoming the EuroMena Funds’ willingness to get involved in Armenia, the Premier expressed readiness on behalf of his government to discuss the future steps in all detail.

Prime Minister Karapetyan next met with President of Future Group Concern Fouad M. Makhzoumi to discuss issues of investment cooperation. Fouad M. Makhzoumi presented his company’s activities in a number of countries around the globe. The Premier invited him to visit Armenia in order to get acquainted with our country’s opportunities, noting that the Armenian side is prepared to discuss the prospects of mutually beneficial cooperation.

Future Group was established in 1981 and over the past decades has evolved from a regional concern to a truly global entity. Headquartered in Dubai with offices in London and New York and business hubs worldwide, Future Group today is a holding company that oversees 30 privately held companies across four core sectors spanning five continents. The Future Group has divisions and subsidiaries in a wide range of different industries ranging from manufacturing and engineering services to real estate development.