Last Visit of Serzh Sargsyan's Presidency: Values Instead of Contradictions 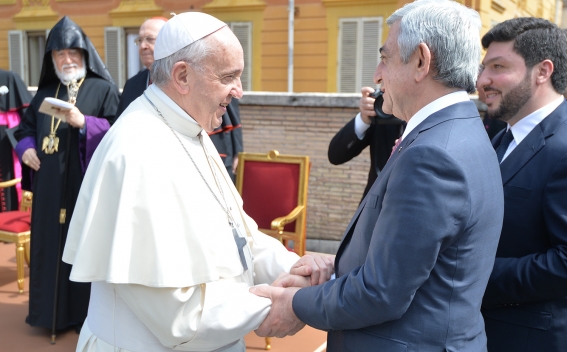 Summarizing the ten years of office in meeting with Pope Francis and attending the opening of the statue of St. Gregory of Narek in Vatican is quite an interesting and symbolic step. In fact, Serzh Sargsyan announced the end of his presidency not with a political visit, but with an event of great spiritual significance.

The choice is not made by chance and has great symbolism in it.

Over the last ten years, a number of developments have been registered in relations with the outside world. Armenia joined the EAEU, deepened strategic relations with Russia, raised its relations with the EU to a new level by signing the Comprehensive and Enhanced Partnership Agreement, initiated a process of normalizing the Armenian-Turkish relations and concluded it, etc. In addition, however, the authorities have been focusing on preserving the Armenian spiritual and cultural heritage and make them more famous in the world. Awarding title of the Doctor of the Church to St. Gregory of Narek by Pope Francis, the installation of his statue in the Vatican is one of the most striking manifestations of the above-mentioned, becoming an important cornerstone of the work done in that direction.

By ending his ten years in office with a visit to Vatican, Serzh Sargsyan, though not directly, but once again stressed that that during his presidency he was guided not by the principle of making choice between the West and the East, but by the principle of combining them two – their approaches, interests and values. And Christianity and the inheritance of the Christian world are one of the common and crucial bases that do not recognize borders.