Prime Minister of Armenia: We Need to Reach Ambitious and Feasible Targets 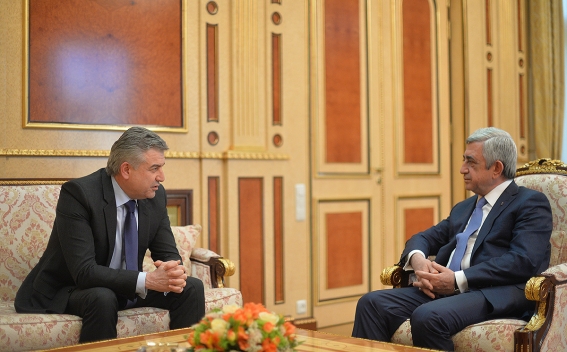 The Prime Minister reported to the President of the Republic of Armenia the results of his government’s activity, noting that all of the proposed macroeconomic targets had been met.

President Sargsyan and Prime Minister Karen Karapetyan touched upon the long-term programs and targets of the country’s economic development, which were periodically discussed at the consultations held with the President of the Republic of Armenia, and for which the Republican Party of Armenia assumed responsibility.

Thus, the process of transition to the parliamentary system of government is nearing completion in Armenia, which means that we are meeting for the last time in this status. Taking this opportunity, I would like to thank you for good work and company; I want you to convey my appreciation to the government members.

Summarizing this period, we should note that since September, 2016, the government has been making great efforts and was able to develop the economy, benefiting from the internal political stability established following the latest parliamentary elections in Armenia.

We have gone a long way in this period, but we must also take into account that the Republican Party of Armenia won the people’s vote of confidence in the parliamentary elections and will have the mandate to form a government until 2022. This means that our party will face the task of developing the country by 2022; I mean first of all me, as the leader of the party, and you, as the first deputy board chairman.

It is clear that everyone is responsible: the members of the executive body and the political board, our territorial entities, but here we are talking about individual responsibility, indeed. And of course, we must continue the process that we have today. Indeed, the results were good in 2017, but last year we also outlined many programs, we gave many promises, and our efforts should be aimed at continuing this process. I am confident that our party will be highly responsive to its obligations and rights, because rights imply responsibility. Thus, we still have a lot to do in this respect.

Of course, during the coming week we will hold in-depth discussions over the ways to achieve these indicators. In general, we will talk about our vision of the country’s development. But as I mentioned already, I would like to convey my gratitude to the members of your government,” President Serzh Sargsyan said.

Prime Minister Karen Karapetyan thanked President Serzh Sargsyan for confidence and joint work, assuring that the future government will have all the necessary prerequisites for implementing sustained and drastic reforms in the coming years.

“Thank you, Mr. President. This is my last report in my present capacity. In a brief summary, I would like to say that all the proposed macroeconomic tasks have been met. We did quite exciting and creative work during this period. Our team has a feeling of cohesion and, in some sense, satisfaction.

Thank you very much for your estimate. Taking this opportunity, I would like to thank you for offering me the position of prime minister, for your trust and cooperation, as well as for enabling a working atmosphere of mutual trust. In fact, the tasks and horizons we have to achieve are already shaped and formulated. Today the team understands it clearly.

The 2030 program you have initiated, and the targets we need to reach are ambitious and feasible at the same time. Of course, we will need to do hard day’s work and consistent efforts, which call for courage. We see the gradient and the targets we should achieve. I think that we are in for exciting times.

According to our estimates, we will boast specific economic achievements in the nearest three to four years that will lay the groundwork for long-term, fundamental and drastic reforms. Once again, thank you for your trust and cooperation,” Karen Karapetyan said.