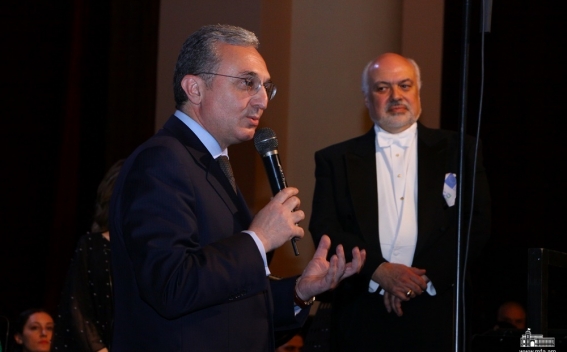 Foreign Minister of Armenia Zohrab Mnatsakanyan sent a message on the occasion of the Europe Day. According to the press service of the MFA Armenia, the message runs as follows:

I would like to congratulate all of us on the occasion of Europe Day and thank the Delegation of the European Union to Armenia for putting together this celebration concert.

Europe Day symbolizes peace and unity, which the modern Europe embodies the best. Indeed, lessons learned by Europe, which experienced two devastating world wars, can be a guiding way forward for the entire humanity. A stable, peaceful and developing society and a true citizen can be shaped only through respect for human rights and fundamental freedoms, tolerance, democracy and other common values.

Since ancient times, Armenia has been a part of European civilization and tried to make its modest, but visible contribution to the latter's development. Today, Armenia continues expanding its ties with the European Union and EU member states, strengthening its position in European structures, in particular in the Council of Europe, and contributing to the work of the Organization for Security and Cooperation in Europe.

Significant developments have been taking place in our relations with the EU since last year's celebration of the Europe Day. Armenia-EU Comprehensive and Enhanced Partnership Agreement (CEPA) was signed in November, 2017 and was ratified by Armenia in April of this year. It is not just a new legal instrument regulating relations between Armenia and EU, but an expression of partnership based on the common system of values. In February, we signed "the Armenia-EU Partnership Priorities" document, which along with the CEPA is the main guideline for further development of bilateral cooperation.

I can certainly say that the new agreement is a unique development plan with its clear goals and timetable, and its successful implementation will have a profound impact on almost all areas of public life.

Ladies and Gentlemen, the interest around Europe Day events held in Yerevan and in our regions is evident. I want this interest and the approaches to spread across the whole spectrum of Armenia-EU relations, our entire agenda and its successful implementation.

Armenia's new government, formed on the wave of the nationwide love and solidarity movement, is determined to continue close partnership with the European Union, remains committed to the established agenda, our commitment and vision to regional stability, peace and sustainable development.