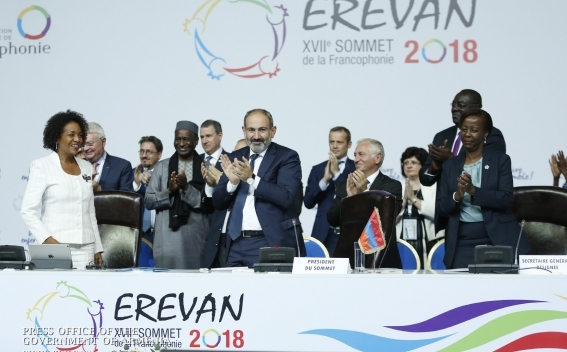 2018 was a unique year for Armenia in terms of domestic political developments that directly and indirectly had its influence both on the foreign policy of the country and on the intensification of relations with different countries. In general, the year was quite active from the point of view of telephone communications, short contacts under different formats, but not in terms of official visits between foreign leaders and Armenia’s Prime Minister.

This is explained by the change of power in Armenia, the ongoing inner-political developments, and the aspiration to reach mutual understanding with key partners. It is no coincidence that the most active contacts were with the EAEU and CSTO partners.

Thus, during the year Prime Minister of the Republic of Armenia made 6 working visits to Russia, one visit to Kazakhstan and one more visit to Tajikistan. Most of the visits were aimed at participating in the EAEU, CSTO and CIS summits. In 2018, Armenia assumed the presidency in EAEU.

At the same time, the relations between the RA authorities and the Eurasian region partners have not proceeded quite smoothly. The reason for certain contradictions became the criminal proceedings launched against CSTO Secretary General Yuri Khachaturov and his withdrawal from the post.

It was followed by contradictions over the new Secretary General's candidacy; Armenia could not manage to retain CSTO secretary general post, as a result, the final decision on the issue was postponed, and probably Belarusian candidate Stanislav Zas will assume the post of the CSTO secretary general. However, the problem is not only connected with retaining the position of the CSTO Secretary General, but with the tension recorded in the background and the deterioration of relations with the CSTO partners, as well as with the blow to the reputation of Armenia within the structure.

In comparison with the Eurasian direction, fewer meetings with European partners were held.

Later, Nikol Pashinyan made three working visits to France and another working visit to the Kingdom of Belgium to take part in the informal summit of the NATO member states and partner countries. During this visit, he first met with heads of EU institutions and leaders of several European countries.  Besides, Nikol Pashinyan has held several meetings with his European colleagues in New York within the framework of the UN General Assembly. During the year no EU official has visited Armenia, which is unprecedented in recent years.  However, German Chancellor Angela Merkel arrived in Yerevan on an official visit in 2018 and Italian President Sergio Mattarella paid a state visit.

The most important point in US-Armenia relations was the visit of the delegation headed by John Bolton, US President’s National Security Advisor. During the year Deputy Assistant Secretaries in the State Department's Bureau of European and Eurasian Affairs Bridget Brink and George Kent visited Armenia.

No reciprocal visits were made with Iran, but Prime Minister Nikol Pashinyan had a meeting with Iranian President Hassan Rouhani in New York within the framework of the UN General Assembly.

As for the normalization of the Armenian-Turkish relations, no progress has been made in this direction this year, moreover, on March 1, Yerevan declared Protocols null and void since Turkey continuously lacked any positive progress towards their implementation.

The most important event held in Armenia from the point of view of foreign policy was the 17th Summit of Francophonie, during which leaders of many countries, including French President Emmanuel Macron and Canadian Prime Minister Justin Trudeau, visited Armenia. The latter’s visit to Armenia was not only dedicated to the Francophonie Summit, but it also was an official visit.

Relations with the Middle East were also in the center of attention. On October 20-21, the RA Prime Minister visited Lebanon. The decision of sending peacekeepers to Syria was also important.

No substantial progress has been made in the process of settlement of the Artsakh conflict, no official meetings at the level of heads of states were held. The Azerbaijani President and the Prime Minister of Armenia had three meetings in the framework of various international formats, agreements have been reached on maintaining ceasefire regime and establishing operative ties between armies. Three official meetings were held at the level of Azerbaijani and Armenian Foreign Ministers.

The interest towards Armenia in the world was quite high due to the peaceful change of power in the country. By the end of the year The British weekly newspaper ''Economist'' has named Armenia as the country of the year and "The Washington Post" recognized Armenia as "one of the three countries that returned to democracy in 2018" and so on.

So, to sum it up, we can state that the year was active in terms of foreign policy, but significant and clear progress with bilateral and multilateral relations with different countries has not been recorded. Active contacts had cognitive character. During the next year, foreign policy is logical to address several important issues - overcoming uncertainty with the EU and reaching a fast ratification of the Armenia-EU agreement, overcoming contradictions with EAEU and CSTO partners and restoring and strengthening Armenia's position within the structure. It is expected that after overcoming internal political upheavals the process of the Artsakh conflict settlement will be significantly activated.