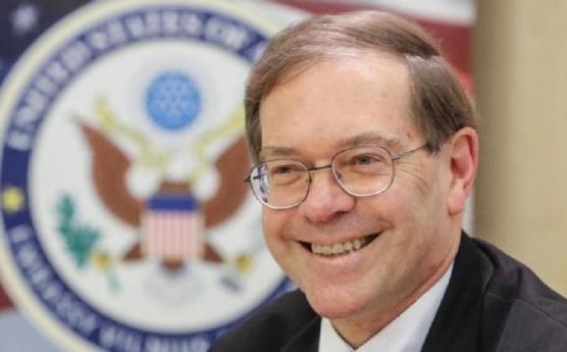 On March 12, 2019 newly appointed US ambassador to Azerbaijan Earle D. Litzenberger  handed his credentials to Ilham Aliyev and thus officially took up his office of head of the US diplomatic mission in Azerbaijan.

Mr. Litzenberger earned a B.A. from Middlebury College and a M.S. from the U.S. Army War College Distance Learning Program.  He is the recipient of 15 notable State Department awards, including the Sinclaire Language Award.  He also received the NATO Afghanistan Medal.  Mr. Litzenberger speaks French, Russian, Serbian and Bulgarian.

Mr. Litzenberger started his diplomatic career in 1984-1986, in the US embassy in Algeria, as political officer. He is a career member of the Senior Foreign Service, class of Minister-Counselor. He worked as Senior Advisor in the Bureau of Political-Military Affairs at the Department of State, a position he undertook in 2018. He served the Department of State as Senior Fellow, The German Marshall Fund in 2017-2018. With over 30 years of service abroad, Litzenberger has focused on Europe, especially the Balkans and Eurasia.

The newly appointed ambassador touched upon a number of South Caucasus related issues on October 2018 while testifying before Senate foreign relations committee. He stated that the US and Azerbaijan have been enjoying cooperation for over 20 years, in the fields of energy security and economic growth, calling the Baku-Tbilisi-Ceyhan oil pipeline a real success of diplomacy. He also touched upon the possibilities of gas corridors noting that it can become part of European energy security. There is an explicit implication of Russia-Germany Nord Stream 2 gas pipeline, given that Azerbaijan can become a subject of European energy security provision, in fact bypassing Russia.

Speaking about South Caucasus Litzenberger noted that the US being one of the OSCE MG co-chairs is willing to work with all sides and stressed that the UN charter and Helsinki final act must underlie Nagorno Karabakh regulation, mentioning nonuse of force or threat of force, territorial integrity, equal rights and self-determination of peoples’. He pledged to do his best in establishing peace and noted that there is no higher priority than the prosperous future of South Caucasus and peaceful settlement of Karabakh conflict.

It is to be noted that Litzenberger’s appointment has caused some unrest among the US Armenian community. In an article published by the Armenian National Committee, there was a call to carefully examine Litzenberger’s candidacy as ambassador to Azerbaijan. The underlying implication was the previous ambassador’s pro-Azeri views and biased position.