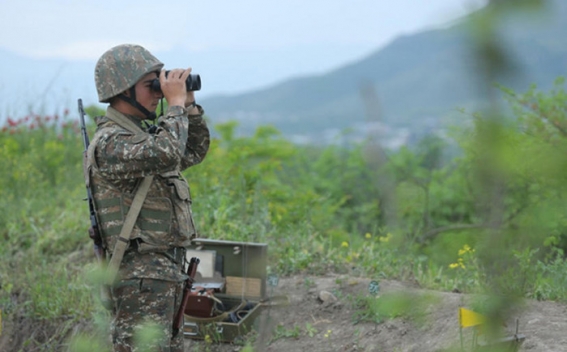 19-year-old Sipan Melkonyan, who was killed on the border of Karabakh, once again stirred up talks about war and peace, which over the past year have put on a different shade - more human one. Following Pashinyan-Aliyev meeting in Dushanbe, the verbal agreement of the two leaders was kept - there were no deaths at the border. And, although many experts blamed the Armenian authorities for departing from the agreements reached in Vienna and St. Petersburg, the fact was obvious: the Dushanbe verbal agreement “worked” better than the written ones. However…

On the day of the visit of the OSCE Minsk Group Co-Chairs to the Karabakh conflict region, the official Baku issued a statement that an Azerbaijani major was killed by an Armenian sniper.  Both Armenia and Karabakh reacted very quickly and sharply to this message, stating that the Armenian parties were not involved in the incident. However, the war machine began to spin again with great force. The next day, allegedly in retaliation, an Armenian soldier was killed in Karabakh.

Many experts tend to think that the death of the Azerbaijani major (without Armenian intervention) was used by Azerbaijani propaganda to destabilize the situation. And the recent talks about peace over Karabakh conflict again vanished. What is the purpose of the official Azerbaijan aiming at destabilization? Is it willing to untie its hands to prepare for a new war - like in April 2016? Or does it aim to play on the emotions of the new leadership of Armenia, blackmailing with deaths on the border and waiting for political concessions?

The Armenian Foreign Ministry has already condemned "the deliberate steps of Azerbaijan over the past three days towards exacerbating the situation, which was expressed through the dissemination of false information about their own losses, direct public calls by representatives of the ruling party on the use of physical violence against the leaders of Armenia and tangible violation of the ceasefire that led to the murder of a serviceman of the Artsakh Defense Army." The Azerbaijani Foreign Ministry called Armenia the “sole culprit” of human losses and mutual disagreements. It would seem that the changing political rhetoric has returned everything to its place, reminding that the dialogue on peace should be mutually sincere, preparation for peace should be parallel in the three countries of the conflict, and only an unaware from Karabakh realities person can believe in the image of “intelligent Aliyev”.

The Armenian Foreign Ministry recalled the Viennese and St. Petersburg agreements on monitoring and mechanisms for investigating incidents at the border, which official Azerbaijan stubbornly “forgets”. The OSCE MG, speaking of humanitarian aspects, also backed down, once again not naming the true violator of the ceasefire in Karabakh. By the way, it is possible that their failed mission on the “exchange of all for all” also became a catalyst for another surge in the anger of Azerbaijan. After all, it is known that official Baku, by hook or by crook, wants to get two murderers - Dilgam Askerov and Shahbaz Guliyev, serving their sentences in Artsakh. Stepanakert believes that Baku is trying to equate criminals and hostages held in Azerbaijan. The authorities of Karabakh declared that they did not and will not negotiate on these two criminals, which again shows that the OSCE Minsk Group failed to fulfill this point of Baku’s wishes.

The Armenian Foreign Ministry notes that Azerbaijan will be fully responsible for the risks of further escalation of the situation and recalls previous attempts of violence, atrocities and aggression on behalf of Azerbaijan, as well as the risks of physical security of the Artsakh people. The likelihood of military escalation is evident, especially since many experts are talking about the retention by Azerbaijan of all units strapped to military exercises on the border with Karabakh. This means that the negotiation process, conducted by Pashinyan and Aliyev, has returned to the old rails. The peaceful discourse today, as before, depends only on the training of soldiers on the border, on the mechanisms of defense, self-defense, and, if necessary, preventive work in this direction. The term "coercion to peace" is updated again. You only have to rely on yourself, meanwhile realizing that Karabakh today is the nationwide idea number one, no matter what they say ...