Artsakh Should Be Fully Involved in the Humanitarian Events: Expert 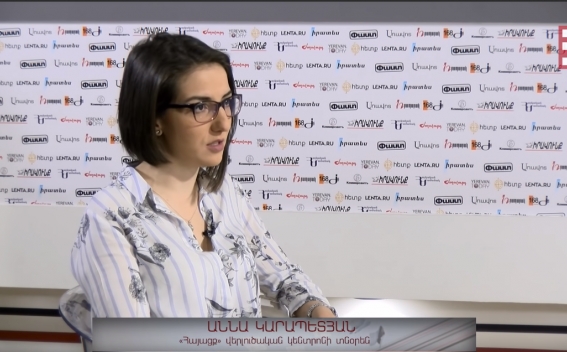 “Today's cynicism on behalf of Azerbaijan is a result of some steps of the Armenian authorities,” Anna Karapetyan, director of “Insight” analytical center said to “Oragir” TV program of the 5th channel.

"The rhetoric of Azerbaijan is not a novelty for us, but this level of cynicism is a consequence of certain actions of the Armenian side," she said, commenting on the interview of Azerbaijani Foreign Minister Elmar Mammadyarov to "Komersant". "Unfortunately, the Armenian side, being inexperienced, did not quite understand Azerbaijan, and maybe too much optimism led Azerbaijan to play a role of a teacher," the expert added.

Referring to the developments in the negotiation process, including the regional visit of the OSCE Minsk Group co-chairs, Karapetyan noted that Artsakh should be fully involved in the humanitarian events.

"If Artsakh does not have direct participation in the implementation of arrangements, it will be not only violation of the logic of the entire negotiation process, but also the principle declared by the acting authorities," she said. Karapetyan also noticed, "At this stage it is evident that they fail to ensure full participation of Artsakh in the coordination of these measures. It is good that the events are also being discussed in Stepanakert. But if we fail to provide full participation of Artsakh in their implementation, those measures would not have value. "

Commenting on the relations with the CSTO partners and, in particular, the candidate for the CSTO Secretary General Zaz's visit to Armenia, Karapetyan noted that Belarusian representative occupying the post can not be regarded as Armenia's diplomatic victory in any way.

"If our goal was to make the CSTO Secretary-General's office be occupied temporarily, then yes, we won. But what do we gain from it? Our goal was to recall Khachaturov, to set up a new candidate, that did not succeed," she said.

The expert stressed that by recalling Khachaturov we created a set of problems and later we had to struggle with them. We did not inspire respect to ourselves, but some disbelief or mistrust. According to her, for a year our discourse has not been for the benefit and development, but to struggle against these problems. According to Karapetyan it is artificial to speak about positive results.

More information can be found in the video.