Kosovo's Lessons For the World And For Armenians 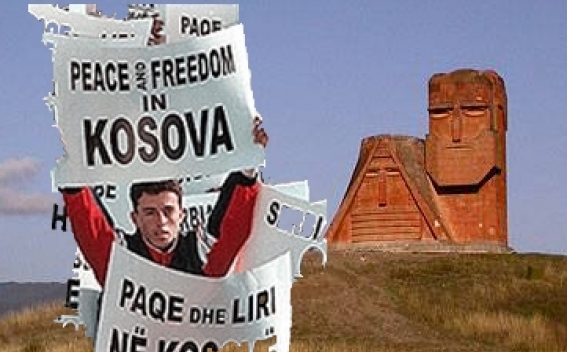 The Kosovo conflict, considered resolved by many - due to recognition of Kosovo’s independence by more than 100 countries, once again claims to become the top theme of global news. The Kosovo authorities announced of the possibility of joining Albania. The idea of ​​“Greater Albania” again flooded the European media, puzzling those countries that recognized Kosovo’s independence.

In Armenia and in Karabakh, this topic went "by" the concerned circles: there were no political assessments, heightened attention of analysts, and dissemination in media. Meanwhile, no matter how much they say that “Kosovo is not a precedent,” Kosovo will continue to remain a precedent for the whole world, since there should be no double standards and electoral law.

On January 1, 2019, joint control was established over the border of Albania and Kosovo. The Ministry of the Interior of Albania stated that this was done to "facilitate free movement between Albania and Kosovo." In the future, the sides also intend to unite their foreign diplomatic institutions and have joint embassies in other countries. Isn’t it the “unification” that the Armenians dreamed of at the dawn of the Karabakh Movement? However ... "what is allowed to Albanians is not allowed for Armenians?" After all, Kosovo, as Western officials would say, is not at all a precedent!

According to Koha ditore, on the initiative of Kosovo’s Foreign Minister, Pristina and Tirana will prepare a study entitled “Albanian Nation in the Coming 50 Years,” which should be “a platform for developing and strengthening the Albanian nation in the Balkans”. And the Prime Minister of Albania even stated that unification is inevitable, and the question is whether it will happen “through joint integration into the EU” or become a reaction to “the blindness and laziness of the European Union.”

Well, perhaps the "blind" countries of the world, recognizing the independence of Kosovo, will understand that the Kosovars did not in fact need independence? Perhaps, they simply handled the transition period better than the Armenians "through independence to unification?" Or the key question - the independence of Kosovo at that time was beneficial to the powerful of the world, therefore this idea became a reality? It is to be recalled that western leaders have reiterated the "specialness" and uniqueness of Kosovo, citing the disintegration of Yugoslavia, ethnic cleansing and the United Nations protectorate. However, the Karabakh Movement also arose along with the collapse of the USSR, they also killed there due to ethnic lines, bombed cities and villages. There was no UN intervention, and there was self-organized defense. But on the whole, Kosovo is more than a “precedent” for such situations as for example, Karabakh.

Moreover, during the Kosovo negotiations, three basic principles were agreed upon: Kosovo cannot be returned to Serbian administration, cannot be divided, and cannot be joined to another state. Today’s (as well as those of the past) statements about Kosovo’s joining Albania indicate that both Albanians from Kosovo and Albania and representatives of the United Nations and other countries who recognized Kosovo’s independence were at least insincere in Kosovo’s sovereignty.

If these countries were sincere, today they would withdraw their recognition of Kosovo’s independence - after all, the country, on behalf of its authorities, declares its unwillingness to be independent and join Albania. And the Kosovo precedent that shook the modern world order, again shatters Europe - in the name of the “great Albanian” ambitions?

In early July Belgrade and Pristina are planning a new attempt at negotiations, during which, as expected, the West will provide a "road map" on the Kosovo issue, which will allow both sides to maintain freedom of action within the given framework. Many years ago, at the dawn of Kosovo independence, the Prime Minister of Albania of that time, Sali Berisha, stated that "the idea of ​​joining Kosovo to Albania does not meet the interests of the Albanian people and can only havoc harm." According to him, in the case of redistribution of borders, Albanians risk losing other territories, which would be "unforgivable."

Now, as international relations change, the rhetoric of international actors has changed. This is an excellent example for the authorities of Armenia and Karabakh, who should be able to speak with the world in an understandable language and promote their interests. We have one interest, which should be put at the center of our rhetoric - Armenia and Karabakh should be together. Because only together it is possible to resist undisguised military aggression of Azerbaijan.

And the world, or, for example, the UN, should help us in this, because, 1. Kosovo’s example is there, and 2. Kosovo was, is and will continue to be a precedent in many international issues, from independence to “unification...”

Today, political circles, parliamentary diplomacy, connections between political forces, the academic community, the media and analysts - at all levels - should intensify their efforts, to get the truth across to the decision makers and the international community,  that Kosovo developments can’t but somehow be related to Karabakh.