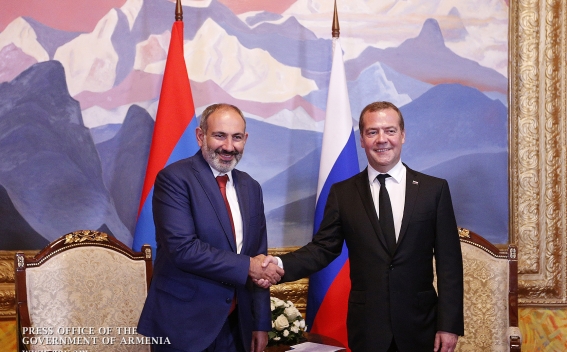 Prime Minister Nikol Pashinyan who is in Kyrgyzstan on a working visit today met with RF Premier Dmitry Medvedev.

The Prime Ministers of Armenia and Russia discussed a wide range of issues related to the Armenian-Russian strategic relations and referred to the current agenda of bilateral cooperation. In particular, Nikol Pashinyan and Dmitry Medvedev talked about the furtherance of trade and economic relations, increased turnover and implementation of joint projects. Nikol Pashinyan and Dmitry Medvedev hailed the dynamic growth in bilateral relations, noting that the active efforts should be continued to strengthen and develop the Armenian-Russian allied relations.

Praising Armenia’s successful chairmanship in the EAEU, Dmitry Medvedev noted that there has been some progress in bilateral relations as evidenced by the frequently reciprocated top-level official meetings and the contacts held in intergovernmental and inter-parliamentary formats.

Welcoming the pace of strategic cooperation between Armenia and Russia, the Prime Minister of Armenia hailed the progress stated in the field of tourism: the number of Russian tourists visiting Armenia rose by 19% in the first 6 months of 2019 as compared to the same period last year, while the total number of tourists visiting Armenia increased by 12.8% in the first half of this year.

Prime Minister Pashinyan noted with satisfaction that the operational mechanism for dealing with problems emerging in Upper Lars proved quite effective. Coming to the furtherance of bilateral relations, the Premier highlighted the need for tapping the full potential inherent the Eurasian Economic union.

During the meeting, the Prime Ministers of Armenia and Russia referred to cooperation in the fields of gas supplies, nuclear power, air transportations, as well as to other issues of mutual interest. The parties took the opportunity to exchange views on a number of high-profile topics featuring in Armenian and Russian media outlets.