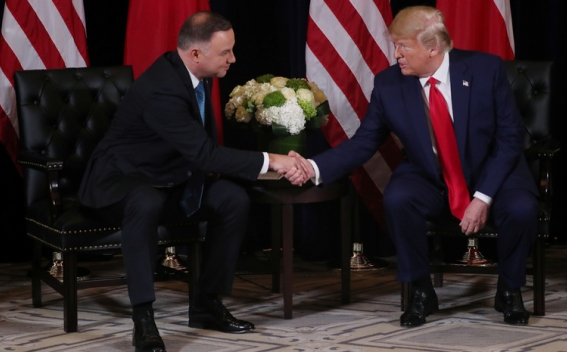 U.S. President Donald Trump has signed a cooperation agreement with his Polish counterpart that foresees an expansion of the United States' military presence in Poland, RFEL reports.

The Joint Declaration on Advancing Defense Cooperation was signed by Trump and Polish President Andrzej Duda on the sidelines of the UN General Assembly in New York on September 23.

The present U.S. military capabilities in Poland, currently at some 4,500 rotational military personnel, "is expected to grow by approximately 1,000 additional United States military personnel in the near term," the document says.

It says the sides have already identified six locations where military presence will be enhanced, and are to discuss the suitable location for an armored-brigade combat team.

Trump said the extra U.S. military personnel would "most likely" be transferred from other European bases, and that Poland will bear "the entire expense" of new facilities for the troops.

The accord, which draws on a framework deal signed by the heads of state in June, was to have been inked earlier this month in Warsaw, but Trump cancelled his visit as Hurricane Dorian approached the coast of Florida.

Asked by journalists whether the bolstered U.S. military presence in NATO-member Poland was meant to counter Russia, Trump said, "No, I don't think so at all."